The Mother of Murdered Trans Woman Talks on Trans Rights

kaosGL.org talked with Melek Okan, the mother of İrem Okan who was the victim of a transphobic hate crime in Bursa in 2010.

We talked with Melek Okan, the mother of İrem Okan who was the victim of a transphobic hate crime in Bursa in 2010: “I still have contact with the other daughters. One of our daughters has recently undergone surgery. I hatefully condemn the people who do not employ our daughters. Remember not only İrem but also Ecem who was killed a year later.”
"Mom, am I unconstitutional?"
Melek Okan, the mother of İrem Okan [who died as a result of a transphobic hate crime in Bursa in 2010], joined the film screening of “My Child” (“Benim Çocuğum”) in Bursa. Melek Okan gave the film its name with her remarks about her child: “They could not find a place for my child to live in this big world.” We had a conversation about what she went through.
First, she said that she liked the documentary very much. She remembered İrem and added: “This film is such a great thing. It made me wish my child was alive to see it. But I am really happy for the other daughters.”
“I want the killer to live through what my daughter lived through”
Stating that the lawsuit process is going very well, Melek Okan still has not found what she expected. Her anguish is still alive. During the conversation she often recalled that her daughter died in pain: “But that murderer still breathes. I want the killer to live through what my child lived through.”
Okan emphasizes that the mothers from LISTAG were always with her after İrem was murdered. She insistently added: “Other daughters were also with me. They stood by me. They welcomed me into their homes. They shared everything with me.”
“I talk with the other daughters; one of our daughters is sewing a costume for me”
Melek Okan says that she still keeps in touch with İrem’s friends. She says that one of her friends recently underwent sex-reassignment surgery: “One of our daughters underwent surgery. I stayed with her. I took her to Bandırma. We went to Umrah (the holy pilgrimage to Mecca). I saved money for her to go to Umrah. I have included that daughter in gatherings with my friends. She is taking a sewing course; I brought her customers and she sews costumes for me. I also talk with the other daughters. I would like them to come here but… they do not want to be revealed.”
During our conversation, mother Melek asked me this: “Yıldız, do you get along well with your mother? Do you see each other? Moms always love their children. They sometimes make you upset, though; do not forget this, my child, will you?”
Regarding the question about the current situation Okan says: “We have reached a great point now; I think we will go further for the better. If I had chance, I would like to join the movement. But I do not have physical and financial means. If I had, I would pour my fortune into this cause. I would buy a house for each girl.”
“I hatefully condemn the people who do not employ our daughters”
We talked about the employment problem of trans people. Melek Okan is very angry. She hatefully condemns those who do not employ trans people. She reminds me of the story of Dilara, another friend of İrem: “This daughter started to work in a dowry atelier through her own effort; but she worked in a cold, segregated corner, facing away from everyone as if they were punishing a child. She made so many ornaments each day. But she could only work for 20 days. Her boss preferred someone else even though they did not work as much as her. I got very upset about her. She could not find a job. She was contented with working in that situation. The money she earns is 100 liras a week; she does not want insurance or lunch.”
“Ecem was also killed; do not forget”
I remind Melek Okan that at the beginning and the end of the “My Child” documentary were her remarks. She said that she loved it. But she has a heavy heart: “I loved it when I saw the sentences because they did not forget. There was also Ecem. They murdered Ecem as well, one year after Irem. But she just disappeared because her family did not stand by her. However, my child will always live in my memories. Remember Ecem as well, will you not you, Yıldız? Just make a little note [of her].” 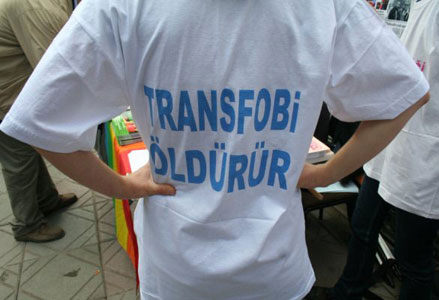 “I always see my child in my dreams as her trans self”
We turn off the recorder. I say I do not want to remind her of her pain. Wiping her tears she says, “I live my pain everyday; turn on the recorder, I will say a few more things.”
The last words of Melek Okan are that she sees İrem in her dreams. She says that she sees İrem in her dreams with her physically reassigned look: “I was not going to come here; I did not want to relive my pain. I saw her in my dreams for two nights. I saw her in Istanbul. “Mom, I am not dead. I am far away,” she said. I saw her as a trans woman. I always see her like that in my dreams.”
Translation: LGBTI News Turkey