The New Domestic Security Bill would impact LGBTI individuals, particularly those who do sex work, as well as all individuals criticizing the government. 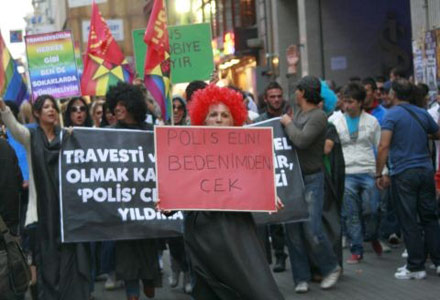 The New Domestic Security Bill would impact LGBTI individuals, particularly those who do sex work, as well as all individuals criticizing the government.
"Police, take off your hands of my body"
Idil Su wrote the potential implications of the New Domestic Security Bill for LGBTI people on Carkmag:
The new legal measures are a clear sign of Turkey moving completely in the direction of a police state. This is because the authorities delegated to the police are the same ones given to security units in countries ruled by dictatorship and monarchy. There are perilous aspects that should be of concern to everyone in this new legislation. The following are the most striking regulations that would impact LGBTI individuals, particularly those who do sex work, as well as those individuals criticizing the government:
1- Police can search any vehicle and person they deem suspicious; the 24 hour detention period is being raised to 48 hours. Detainment in mass events may be increased up to four days through prosecutorial order.
In other words, the police can stop anyone on the road and detain them on the basis of “reasonable doubt” and the prosecutor can extend the detention period. This means the police can take into custody if they want a sex worker on the street or any individual out with their friends and family under “reasonable doubt” and can prolong their detention up to 48 hours.
2- The scope of crimes for asset forfeiture is expanding
They may seize our property which, in their definition, may be seen as illegally acquired. In other words, property acquired through actions legally defined as criminal can be seized by the state. But at this point, the law concerns only catalog crimes. Its scope may be expanded, though. For example, prosecutors and courts can seize the property of people who join protests if they are accused of upsetting the constitutional order through their participation in anti-government mass protests. In other words, anyone who criticizes the government can be classified as a gang member and their property seized by a court order.
3- Our homes will be searched more easily; our phones will be tapped more easily.
They will make life more difficult for sex workers. They will keep track of all our communication information. It sounds like phone records alone will constitute evidence; therefore the government will track all telephone and internet communications.
4- The law requires the notary to share with and report to the police all of our transactions.
5- Lawyers may not be able to examine their clients’ files during investigation; they may not be able to find out the charges and their bases.
In other words, prosecutors may choose not to show the files of people who will be tried while in custody to their lawyers. They will try to prolong detention.
6- Finally, the bill proposes a new crime, that of “threatening” civil servants.
This article paves the way for anyone who criticizes the government to be seen as a potential criminal. If we bear in mind that courts frequently convict people by charging them with the crime of “insult,” it is inevitable that the crime of “threat” will be used to silence oppositional voices. In other words, the government will track social media and will be able to prosecute people for threatening government. We will either have to show support for government’s every action or like in North Korea, we will all shed fake tears. It is truly very grim. Everything the government does will be seen as right. In short, we will say, “Oh Sultan, Long Live!” Or else, it is prison.
Translation: LGBTI News Turkey