On corporate involvement and pinkwashing in the Amsterdam Canal Pride. 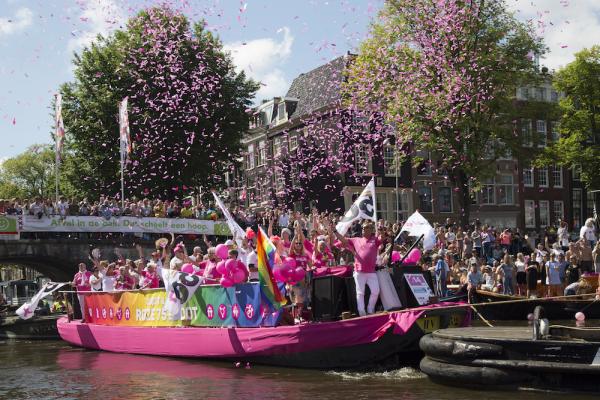 On corporate involvement and pinkwashing in the Amsterdam Canal Pride.

Recently there has been growing critique regarding the increasing corporate involvement in the Amsterdam Pride. As a response the organizers have set new criteria: only companies that have an internal LGBT anti-discrimination policy are allowed to participate. These corporate “diversity policies” however, mainly seem a form of pinkwashing in a context where these same companies structurally destroy the security we need to live our queer lives.

Since its inception, business interests have played a prominent role in the Amsterdam Pride celebrations. The initiative for the now famous boat parade through the inner-city canals, was actually taken by an organization called Gay Business Amsterdam, a small group of gay entrepreneurs, who wanted to put Amsterdam in the spotlight as ‘Gay Capital’[1]. And aalthough the official Pride organization states that it is increasingly promoting the participation of civil society organizations, the influence of corporate business has grown steadily over the years. The amount of corporate boats appear to be on a steady increase[2] and the organizers make no secret of the fact that the  Pride, in the present form at least, is heavily dependent on corporate sponsorship[3]: a large part of the increasing costs are financed by the participation fees which vary between 250 and 30.000 euro’s[4] per boat.

Activists have critiqued this intimate relationship between the Amsterdam Pride and corporate business since quite a long time. One of the main arguments is that the Amsterdam Pride has increasingly come to reflect a corporate (white, male, gay and middle/upper class) agenda at the expense of the needs and political demands of the most marginalized in the LGBTQI community and in society at large. “We demand more: more politics, more visibility for queers of color across borders, more space for gender outlaws, more protest, more anti-commercial demonstrations of our truly diverse community” states a flyer dating back to 2010. Different actions were organized to expose this exclusionary corporate dynamics in the Amsterdam Pride. There were banner drops from bridges along the Pride route with slogans such as Where’s my Pride? (2010) and Proud to be: a commodity? (2012). In 2014, minutes before the Pride started, a black and pink painted boat called the Anal Cruiser, entered the Amsterdam canals carrying a banner stating “Fuck assimilation. Fuck corporations. We take our own liberation”. During the last Pride, in August 2017, a bridge was occupied by dozens of protestors that hang banners including “Pride doesn’t equal Profit”, “No Pride in commerce” and shouted slogans at the corporate boats.

Initially, these were quite marginal initiatives that hardly had an impact on the public debate around the organization of the Amsterdam Pride. However recently the critique seems to be shared by an increasingly larger audience: around the last Pride celebrations ever more articles critical of the involvement of corporate business have been published on mainstream websites and in nationwide newspapers[5]. Additionally with the participation of around 100 protestors, the last protests during the Amsterdam Canal Pride 2017 was relatively large in comparison with previous years[6] and also spread to Pride celebrations in other cities such as Utrecht and Rotterdam.

Under the pressure of this increasing criticism, the Pride organizers have set new selection criteria for corporate participation. To be able to pass the official Pride ballot commission, companies need to have an LGBT company network and have an internal  company policy that explicitly contributes to LGBT acceptance. Some of the critics of the corporate involvement in the Pride have come out in favor of these new criteria, arguing that through these “corporate policy initiatives”, the companies at least contribute to LGBTIQ+ acceptance[7]. At first glance, this argument makes sense: company-based anti-discrimination policies have had important results in improving the lives of LGBTIQ+ employees. For certain segments of the LGBTIQ+ community it has become relatively easy to get and retain a job. Additionally these ‘diversity policies’ are an important signal that discriminatory behavior is not acceptable in the workplace[8].

However the effects of these “anti-discrimination policies” cannot be isolated from a broader focus on the economic policies that these companies propagate regarding decent work and work security. After all, the majority of us LGBTQI people are poor or working class, female and people of color, who struggle to have a job or hold on to one to pay their rents and care for themselves and the people they love[9]. Therefore as LGBTIQ+’s, we need decent work and economic stability to lead open and secure lives. If, however, we critically analyze the` broader economic policies of the companies that participated in the Amsterdam Pride[10], we see they actually have quite a problematic track record in this respect.

The “Pride companies” and decent work

One of the larger multinationals with a boat in the Amsterdam Canal Pride was ING bank. A multinational with a long standing reputation regarding their diversity policy and a large LGBT network. These socially progressive trappings, however, are not reflected in ING’s wider employment practices. In 2016 ING cut 7000 jobs, 12% of their total workforce, whilst profits that year increased by 18%, mounting to a total of 4,6 billion euro’s. Trade union FNV labeled the massive lay-off as a "race-to-the-bottom" and as "an ordinary cost-cutting measure at the expense of the staff."

The privatized healthcare institution Cordaan, another participant of the Pride, has been engaged in a battle with its workers protesting their increasing workload and structural lay-offs. In 2016 the healthcare company cut another 16,7% of full time jobs whilst the president of the board, Eelco Damen continues to enjoy being in the top 10 earners in the healthcare sector. His salary alone (290.051 euro’s) is good for 7 full time jobs. Other companies in the Amsterdam Pride have contributed to eroding decent work through illegal constructions of unfair competition. For example Uber, contributed to bankruptcies, insecure and underpaid work in the formal cab-driving sector by using illegal constructions for self-employment. Although Uber state that they have a LGBT policy, they have been under fire in the media at large regarding its institutionalized sexist culture. Organized workers of several of these companies have protested and resisted their worsening labour conditions and increasing precarity. In some of the ‘Pride companies’, such as Vodafone, these workers were met with intimidation and bullying from the management. Clearly Vodafone isn’t fond of unions: for some time they have refused to sign a collective bargaining agreement, denying workers any protection beyond what is stipulated by law. Especially since the merger with telecom company Ziggo, the position of 3500 Vodafoon workers is looking increasingly precarious.

An analysis of the larger corporate players in Amsterdam Pride reveal that the companies that promote LGBT rights internally, are simultaneously destroying the economic stability we need to live secure and open queer lives. This ‘race to the queer bottom’ has a known international dimension and is therefore likely to extend all the way down their globalized production and supply chains.

In the context of the erosion of decent, secure work, we can ask ourselves: what exactly is the relevance of these corporate “diversity policies”? For example: in the case of a lesbian flex-worker being discriminated against, is it likely that she will claim her ‘lesbian workers rights’ if she is not sure her contract will be prolonged? Or if she might be one of those to be fired in the next round of massive lay-offs? If a trans healthcare employee, working on a 0-hour contract, is discriminated against, will she claim her ‘trans workers rights’ if she’s not even sure she will be allowed to come to work the next day? This situation becomes even more complex imagining that the perpetrator might be somebody higher-up in the corporate hierarchy and have influence over employment decisions.

Studies show that the success of a company’s “codes of conduct”, such as an LGBT antidiscrimination policy, is dependent on stable working conditions for workers and an independently well-organized workforce. In a context where companies policies actually pursue the opposite (erode security and oppose unions) a “diversity policy” can be best described as an attempt to “create equality on the Titanic”[11]. And although it’s important to have this type of equality in the short-term, it is not enough. It is time to recognize the corporate boats in Amsterdam Pride for what they are: neo-liberal Titanics with a pink ribbon that will make us sink fast and deep into the cold waters of queer precarity. An isolated and single focus on corporate diversity policies and LGBT networks in this context can only work as a new level of Pinkwashing: redirecting our attention from the broader role these actors have in destabilizing our (queer) lives.

[8] See among others Richard Blum