The Problems of Imprisoned LGBTs are Being Rendered Invisible

Civil Society Association in the System of Punishment Execution (CİSST) organized a workshop for the first day of LGBT Pride Week, entitled as ‘Being LGBT in Jail: What Do We Know, What We Can Do?’ 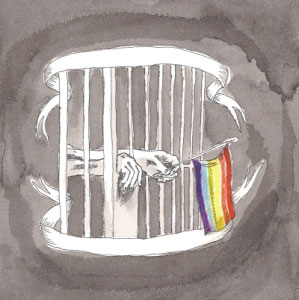 Civil Society Association in the System of Punishment Execution (CİSST) organized a workshop for the first day of LGBT Pride Week, entitled as “Being LGBT in Jail: What Do We Know, What We Can Do?”
In the workshop CİSST Board Chairman Zafer Kıraç gave a speech on the association’s works but it was not limited to the LGBT aspect of jails alone, but rather a holistic approach was adopted to criticize the jails by the notion of “being indoors” CİSST embraced. The necessity and the functionality of jails for the society have been discussed by the participants.
Kıraç told that CİSST has been founded as a result of the shame they felt due to the fact that there are so many people in jail in Turkey, however, there used to be no main associations on the issue. He underscored that after a visit to Brussels he found out that there are 17 associations in the city regarding jails.
CİSST has three main roles: (1) Conditions and complaints of all the imprisoners with no exception. No matter political, judicial, woman or LGBT criminal, everyone is to be reached based on the notion of “being indoors”. (2) Problems related to the personnel. Personnel have complaints about their working conditions as well. (3) People who were victimized due to the crimes committed by people in jail.

According to Zafer Kıraç, they cannot deal with the third point much because of the time shortage. The second point used to be a problem for a long while as talking to the personnel was considered somewhat mean and many groups did not bother about their problems. However, executioners have 5 times more work load in Turkey compared to Europe. It is a case of mistreatment of the State against its own officials.

It was underlined that prison conditions for LGBT individuals and treatment towards them remain unresolved all around the world.
It was also said that Ministry of Justice, prison authorities and executioners do not know how to treat LGBT individuals out of ignorance, rather than their bad intentions or homophobia. It is thought that those units will consider it positive to have a guidance for ethical code of 1-2 pages by CİSST as they would work more easily.
It is unanswerable for most of the prison officials when it comes to issues like who should search the body of an LGBT in prison and how, which ward a trangender should be moved to or personal needs of them and so on. Participants also expressed that contrary to the popular belief oppression of LGBTs is not always directed from the state policy but non-LGBT people’s homophobia adds up to it as well. How homophobia in jails can be swept away is discussed either.

One of the most vibrant discussions of the workshop was that Ministry of Justice does not take the reactions seriously unless concrete projects are represented.
Among the participants Kemal told that on behalf of Pink Life Association he met senior authorities from Ministry of Justice but he was disappointed due to their disinterest. According to Kemal, the ministry is not convinced that people and NGOs in particular is capable of making good work on the issue, therefore, it wants to see concrete solution suggestions. Also, he thinks that the ministry is aware of the complaints and discontent of LGBT individuals, however, it is trying to render the issue invisible.
Member of Dut Ağacı Kolektifi (Mullberry Tree Collective) and conscientious objector Ercan Aktaş who was imprisoned for 9 years from being a member of an organization said that as a bisexual he was not out in the jail and he drew attention to the structures in dissident organizations. Claiming that organizations still bother about people’s sexual orientation, he said “just like socialist groups do not make fuss about ethnic identification, it must be the same for sexual orientation”. Telling that he had been through some love affairs with people in his ward who were convicted from the same crime, he never lived his affairs openly and those who did came across with great problems. Moreover, according to Aktaş moving to another ward is no solution because leaving the organization is a big trauma itself so a new moving would lead to a new isolation. When people realize that they would face isolation if not direct reaction from their own organization, they prefer to keep their sexual orientation hidden.

At the end of the workshop decisions were made to form monitoring groups, prepare a document on how to treat LGBT individuals in jail and organize a workshop with a group of LGBTs in Maltepe Jail for which a permission is already acquired. It was emphasized that one of the greatest problems of LGBTs in jail is the lack of people or visitors for them to talk to. Imprisoned LGBTs feel a great need to have somebody to talk to, therefore, it was suggested that a pen pal program can be made up.
CİSST calls up everyone who is interested in LGBTs in jail for a help in the process. At the end of the workshop an e-mail group has been formed that the discussions would take place there. CİSST has also a huge need to be aware of the international practices. Whether LGBT-centered or not, they would be more than happy to have related news and articles translated into Turkish.
* E-mail group: lgbt-hapiste@googlegroups.com