Amnesty International has released its report on refugees on the Turkish/Greek border, saying "Refugees are paying the price for Europe's failures." 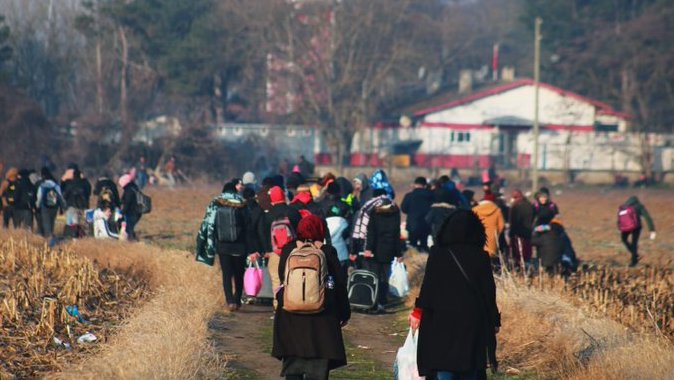 Amnesty International published a report titled "Caught in a Political Game: Asylum Seekers and Migrants on the Greece/Turkey Border Pay the Price for Europe's Failures", revealing the results of research on what has happened on the Turkey-Greece border in recent weeks.

“The last stage of the EU's policy of not accepting refugees”

Andrew Gardner reminded that as Amnesty International delegation, they went to Edirne on March 4-5, said they had spoken to both refugees and civil society on the ground, and that the demands for appointments from the Turkish authorities were not met.

"The events we saw last month are not a new phenomenon. It's the latest part of the EU's policy of not accepting refugees. We see that present policies are applied more severely. We have seen violations, deaths, pushback, arbitrary detentions and violence in the past years," Gardner said.

Gardner said it was irresponsible for the Turkish Government to declare the unilateral statement of  "borders have been opened, go" while the EU has such a policy, and shared their observations as follows:

"We're talking about planned and facilitated refugee flow, in Edirne, but where they went, people sleep on open fields. There are only blankets or sheets of plastic under them. We found out that there was no planning regarding their basic needs, such as clean water, food, housing, while their departure was being planned."

Damla Uğantaş conveyed the situation on the Greek islands, said 510 people were detained on a defense ship called Rhodes, located in the port of Lesbos, and added that there were unaccompanied children among them.

Uğantaş said that the suspension of the right to asylum creates a serious crisis, "Except for a brief statement made by the EU Commissioner for Home Affairs, the EU ignores Greece's rights violations. There is violence both from the island people and cases of violence supported by the state and condoned. Because of this, so many non-governmental organizations have had to withdraw from the field" Uğurtaş said.

Uğantaş addressed to the Greek officials, "The right to asylum is one of the most fundamental rights and cannot be suspended in any way. Due to COVID-19, the closure of the centers is acceptable, but the measures taken due to the epidemic must be in line with human rights". Uğurtaş said people were being prosecuted for border crossings because Greece has suspended the right to asylum with an emergency package, stressing that these practices should be put to an end.

Uğantaş told the Turkish authorities to give up their unplanned policies that put people in danger, "You can't just say go and do whatever you do. Refugees need to be stopped from being used as pawns in the field" they said.

"Any condition without the right to shelter, LGBTI+'s are being exposed to further rights violations"

Amnesty officials also answered our question on whether they had any observations of the problems experienced by refugee LGBTI+'s, who were not included in their reports.

Gardner said that they had not been able to reach refugee LGBTI+'s during their own interviews, but the Refugee Rights Commission would issue a statement on the issue soon.

"I can say this through what we see on the border of Edirne: Every situation where there are no housing and special field conditions opens the door to further rights violations for LGBTI+'s and women. The Refugee Rights Commission will provide much clearer information, but we can say that the people there are left very severely vulnerable to violence and harassment” said Uğantaş on the matter.

After Turkish authorities misled people to go to Greece, Greek border forces used regular ammunition and tear gas against asylum seekers and migrants, according to Amnesty International. At least two men have been killed during the violent incidents and one woman is still missing.

As of February 27th, thousands of people set off towards the border after Turkish authorities encouraged and facilitated the travel to the Greek border. Some asylum seekers and their families living in Turkey have closed their homes and spent all their money to get to the border. Greek authorities, however, have strengthened border control by directing police and soldiers to the area.

Amnesty International confirmed that two people were killed on 2 and 4 March on the Greece-Turkey land border.
Click here to read the report.