To Live Togehter Positively in Germany

Since many people in Germany who live with an HIV infection get medical treatment, the death rate has significantly decreased and HIV positive people become older and older. 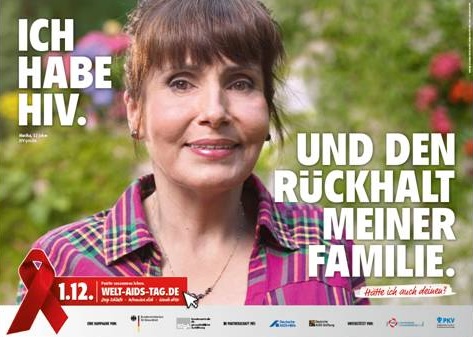 As for 2012, 81,89 million people live in Germany. Out of this number, according to an estimate of the Robert-Koch-Institut, about 78,000 people (63,000 men, 15,000 women and 200 children) live with HIV. 65% are men who have sex with men, 22% are women and men who have heterosexual sex and 11% are intravenous drug abusers. The other 2% are people who have been infected in the early 1980’s by blood transfusion, and people who have been infected before, while or after their birth by their mothers.
The estimated number of not yet diagnosed and therefore unknown HIV-infections is 14,000.
After the rate of new infections reached a peak level in the 1980s, it has been decreasing until the end of the 1990s. But since 2000, the number of new HIV-infections is rising again. The total number of new infections in 2012 is about 3,400 people.
Since many people in Germany who live with an HIV infection get medical treatment, the death rate has significantly decreased and HIV positive people become older and older. In 2012, about 550 deaths caused by HIV/AIDS have been reported.
In Germany, it is obligatory to have health insurance. Costs for the HIV/AIDS treatment are covered by the insurance. This is one reason for the increasing life expectancy of people who are infected with HIV and it is an important requirement to combat HIV/AIDS.
Besides the increasingly good medical treatment for HIV positive people, an important topic for the fight against HIV/AIDS are preventive programs and campaigns. Since one important reason for the spreading of HIV/AIDS is still lack of information and knowledge about the virus, many educational programs and campaigns are being implemented. At the same time, it is assumed that the widely existing discrimination of people who live with HIV/AIDS causes a great problem not only for the people who are affected. For as long as HIV/AIDS is a taboo, people might be ashamed to get tested or to ask their sexual partners to get tested or use a condom.

Two of the most known campaigns of the last years are the „Don’t give AIDS a chance“ campaign, which encourages people to use condoms, and the campaign „to live together positively“, which stands against the discrimination of HIV positive people and for the inclusion of HIV positive individuals in all parts of social life. Countless huge posters in all kinds of public places such as train stations and streets as well as TV spots are part of these ongoing campaigns.