Refugees who have been sentenced to deportation for participating in the İstanbul Convention protest are still being held at the removal center. The lawyers objected the deportation order: They must be released as soon as possible! 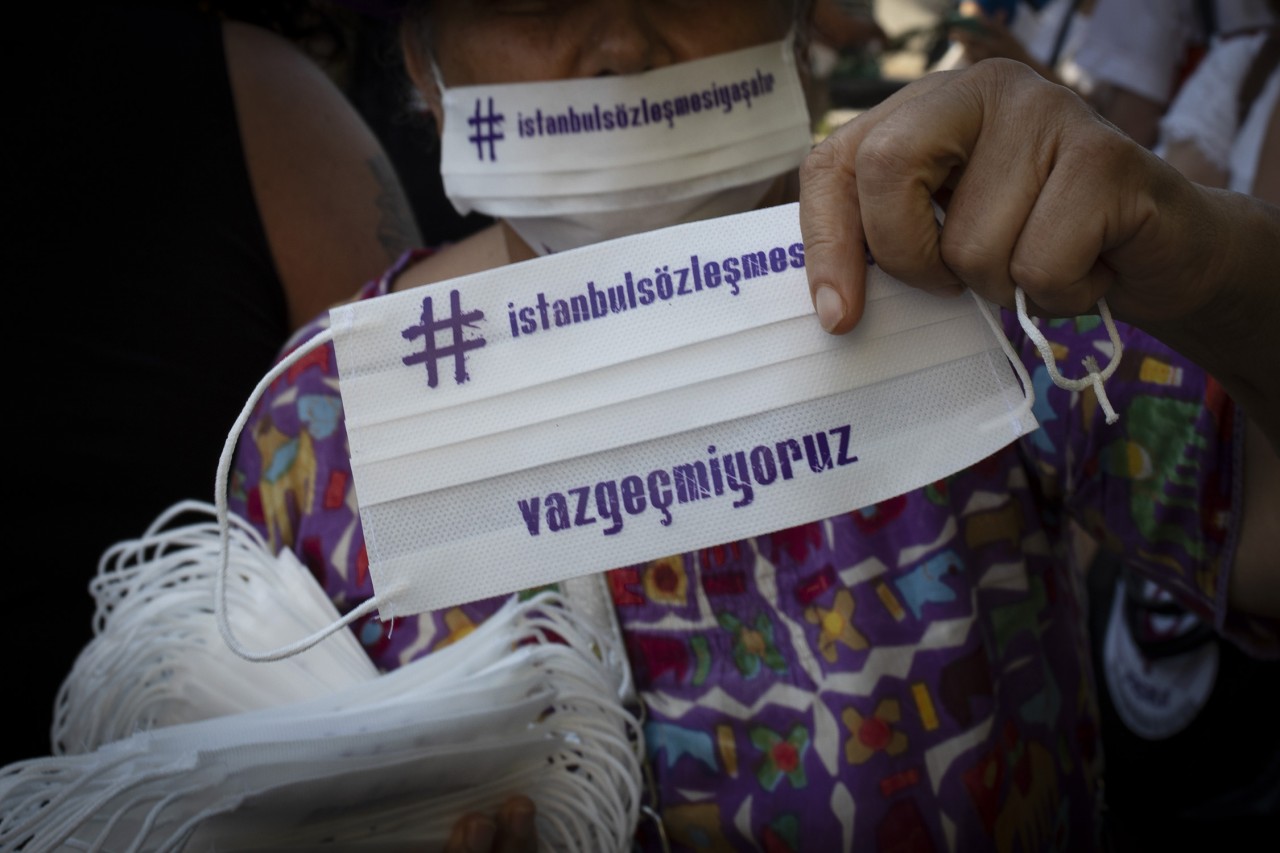 “We are not giving up İstanbul Convention”, Photo: Serra Akcan / csgorselarsiv.org

Four refugees in Denizli were recently sentenced to deportation on the grounds of 'violating public order' for participating in the İstanbul Convention protests.

The refugees have been held at the Aydin Removal Center since April 6.

Buse Bergamalı, attorney of the refugees, informed KaosGL.org after meeting with their clients. Att. Bergamalı stated that the refugees are being held under administrative supervision and they are appealing the deportation order:

Four Iranian refugees have been sentenced to deportation for participating in the İstanbul Convention protest in Denizli.

On March 20th, refugees who participated in the press conference on the İstanbul Convention were detained in Çınar Square in Denizli. "Attending press conferences" and "holding banners" were cited as the reasons for their detention.

Refugees were also prevented from meeting with lawyers for a long time. Att. Yağmur Yalçın of Denizli Bar Association told KaosGL.org what happened on April 6. Att. Yalçın said the refugees were immediately sentenced to six months of administrative supervision and deportation. Att. Yalçın also stated that as Denizli Bar Association, they will sue for the overturn of the 6-month administrative detention order and the cancellation of the deportation order.

An administrative detention order and deportation orders were issued for attending a press conference and holding banners. According to the information we have acquired, they are currently on their way to the Aydın Removal Center. We haven't even had a chance to see each other yet. The law enforcement was giving a hard time while providing information in cases involving refugees. They didn't give us the reports, we were only able to do an examination. They tried to avoid us at the police station. We have information on mistreatment, but we found no such information in the medical report. But this does not mean that they are not subjected to mistreatment. We can't provide clear information on the issue now because we can't see each other. We are trying to get information as Denizli Bar Association."

Kaos GL Refugee Rights Program Coordinator Att. Hayriye Kara also reminded that to participate in a protest related to the İstanbul Convention is well within the freedom of meeting and demonstration:

"You are being deported for 'violation of public order' without proper assessment just because you attended a press conference and carried a banner. How is such an act violates public order? The obstruction of freedom of expression is what violates public order. Reasons for deportation are ambiguous concepts such as 'public order, public safety', as the law itself. And through these ambiguous concepts, deportation orders are being issued very easily. There is no effective assessment process on whether they are people who shouldn't be deported. Also no assessment of whether there is a violation of the principle of non-repatriation. In addition, the authorities do not inform refugees about access to their rights. There's no such mechanism. Even lawyers face challenges. We've seen an example of this yet again. Everyone who defends the İstanbul Convention faces sanctions such as detention, while refugees face the extra threat of deportation."