A law draft proposing the foundation of Turkey Human Rights and Equality Agency does not bring protection based on sexual orientation and gender identity despite of opposition parties’ efforts. 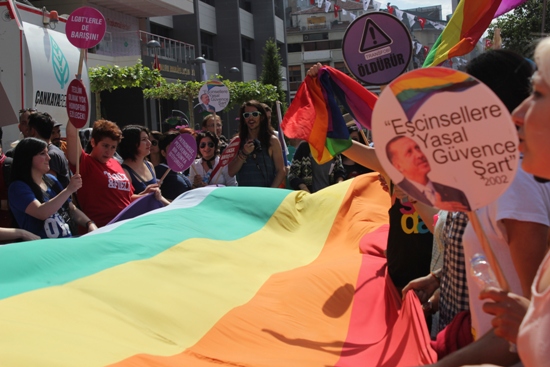 A law draft proposing the foundation of Turkey Human Rights and Equality Agency does not bring protection based on sexual orientation and gender identity despite of opposition parties’ efforts.

An activist carrying a banner showing Turkish President Recep Tayyip Erdogan with a statement he made during a TV show before his first election victory in 2002: "Gays need legal security."

A proposal by the main opposition Republican People’s Party (CHP) and pro-Kurdish Peoples’ Democratic Party (HDP) to add “sexual orientation and gender identity” among grounds to be protected by a new human rights law in Turkey was rejected by the ruling Justice and Development Party (AKP).

While the HDP left the working group of the Turkish Parliament’s Human Rights Investigation Commission, the draft will soon be voted in the AKP-majority parliament.

Vice PM uses Europe as an excuse for LGBTI discrimination

According to the commission report, Vice Prime Minister Lutfi Elvan answered a question regarding the absence of “sexual orientation” in the draft:

“In Europe, too, there is a serious debate about it. When we consider the Constitution and international conventions we ratified, we thought that it would be inappropriate to add such a term in this [draft]. We have to embrace the whole society and act according to this approach.”

“They have a digestion problem regarding sexual orientation”

As Elvan dismisses standards on sexual orientation and gender identity by the Council of Europe and European Court of Human Rights, CHP MP Mahmut Tanal, who submitted a parliamentary question on LGBT inclusion in the employment policies last year, suggested sexual orientation be in the draft:

“They [the AKP] said that there is a digestion problem regarding especially sexual orientation. But there is a such a reality and there are also international conventions we ratified and recommendations. Not accepting this phenomenon while following recommendations in general and trying to solve it by dismissal means continuation of the problem. As you know, this [LGBTI rights] is not something that has no support in the public opinion.”

HDP leaves commission due to homophobia

The MPs stated that the AKP does not even bother to listen to any proposals by other parties and civil society, and that the draft is being prepared in a rush without a human rights perspective.