Turkish Minister of Labor to answer motion about LGBTI employment

Ertugrul Kurkcu from the pro-Kurdish Peoples’ Democratic Party (HDP) submitted a motion regarding the employment of LGBTI people to the Labor and Social Security Minister Faruk Celik. 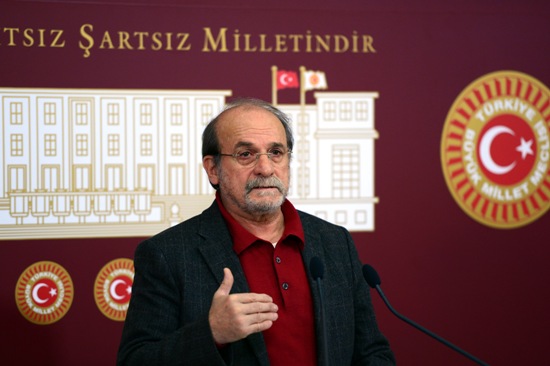 Ertugrul Kurkcu from the pro-Kurdish Peoples’ Democratic Party (HDP) submitted a motion regarding the employment of LGBTI people to the Labor and Social Security Minister Faruk Celik.
Ertugrul Kurkçu, MP from the pro-Kurdish Peoples’ Democratic Party (HDP), asked the Labor and Social Security Minister Faruk Celik if they will begin taking actions about sexual orientation and gender identity discrimination in employment.
Minister Celik did not count LGBTI (lesbian, gay, bisexual, transgender, intersex) among disadvantaged groups in the labor force participation while answering the proposed motion Mahmut Tanal from the main opposition Republican People’s Party (CHP) presented in November.
Conventions to which Turkey is a party are for LGBT equality
The EU Harmonization Committee Member Kurkcu pointed out that contracts to which Turkey is a party, treaties and recommendation decisions include measures and proposals regarding targeting anti-discrimination of LGBTI and stated the following with regard to the ministry’s answer:
“The answer of your ministry states that government employment policies toward the removal of inequalities based on sexual orientation and gender identity would dispose any step forward while also stating that supporting the participation of disadvantaged groups in the labor force has no special study regarding LGBTI.”
What are your projects for trans people working in unhealthy conditions?
Kurkcu emphasized that the European Union directives, which Turkey also follows, include employment policies involving LGBTI people and directed the following questions to the Minister Celik:
“On which grounds is no work carried out for lesbian, gay, bisexual, trans and intersex citizens under the promotion of participation in the labor force for fractions who are disadvantaged in social life?
“Will your ministry take precautionary steps on anti-discrimination regulations to strengthen LGBTI people in working life through employment policies implemented by your Ministry on sexual orientation and gender identity based on the equality perspective while revising these to be in line with the EU legislation?
“Does your ministry have a study to help implement policies in order to prevent social and economic exclusion of people exposed to discrimination due to their LGBTI identity who are fired and not hired?
“In particular, does your ministry have projects prepared for the situation of trans people having to work in unhealthy conditions as unregistered sex workers without social security? If yes, what is their content? If no, what is the reason?”
Translation: LGBTI News Turkey