Trans Angels, a solidarity group among trans women in Turkey, took action following the death of two trans women in last two weeks. Oyku Ay, the leading figure of the group, told kaosGL.org how they claimed the funerals and stood together. 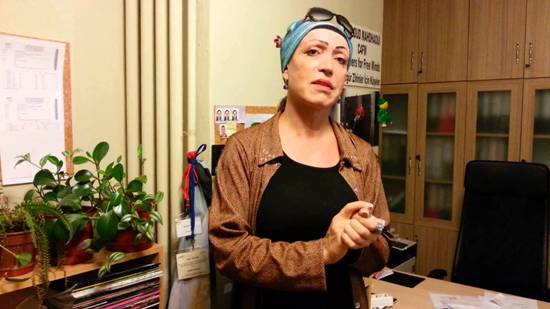 Trans Angels, a solidarity group among trans women in Turkey, took action following the death of two trans women in last two weeks. Hande Oncu, who left Turkey because of transphobia for Vienna, was killed in a hate crime on January 19. Another trans woman, Madonna, lost her life due to ill-health in the western city of Izmir on February 5. Oyku Ay, the leading figure of Trans Angels, told kaosGL.org how they claimed the funerals and stood together.

Oyku Ay became a well-known figure among trans women after she organized Turkey’s first trans fashion show in November to raise up money for a shelter in Istanbul named the Trans Guesthouse, which was founded by Istanbul LGBTI Solidarity Association. Upon the Besiktas Municipality’s free health care support to the shelter, she has all the reasons to feel proud of her work.

Her Facebook videos, which always start with “Hello friends, my name is Oyku Ay”, is an inspiring example of how social media can be used to mobilize a vulnerable community. Ay, who was awarded with the Prize for Fighting Hate Crimes by Ankara-based Pink Life Association during a series of events to mark Trans Day of Remembrance (TDoR) in November, feels bewildered by how two families can differ on embracing the death of their trans kid.

The family did not accept the body of their trans kid

“Hande Oncu escaped from the transphobic violence in Turkey and settled in Vienna, where she thought as a safe place in Europe. There she was murdered. Her family is a very educated one. Her father is a police commissioner, her brother and aunt-in-law are lawyers”, Ay told kaosGL.org. However, the family did not accept the body of Oncu, nor did they give their permission to ease the transfer of the body back to Turkey.

Then, Trans Angels rolled up their sleeves and collected the necessary amount of money to bring the body to Izmir for an Islamic funeral instead of cremation, the usual process for unclaimed bodies of asylum-seekers in Austria.

“We wrote to the Turkish Embassy, to the Religious Affairs Foundation. They made a discount for us. [The transfer] costs 2600 Euros but we got all things done for 2000 Euros. A dear friend of ours in Vienna, Janet, helped us and we used a company. They brought the body to us.”

Ay told that the family did not attend the funeral accompanied by about 100 trans women because of Oncu’s gender identity but they watched the funeral prayer from a distance.

“Only the brother joined for the prayer, he performed his prayer and went away.”

A week after, Oyku Ay was in Izmir again, this time for the funeral of Madonna, leaving her amazed by an unexpected embracement.

“Madonna was a very important person for the trans community in Izmir, making her mark in the city. Her family lives in a rural area, practicing their religious duties – a simple and ordinary family. They took about 100 trans women under their wings from the mosque to the funeral. I was shocked. That was a milestone for me. Imagine, all her brothers and sisters and nephews, not only the family but the whole neighborhood, embracing about 100 trans women. And no one even cared [that they are trans].”

Ay appreciates the family’s hospitality who served their guests tea, halva, ayran and pita as part of a well-established funeral tradition in Turkey.

“We have to heal our scars ourselves”

One feels obliged to ask “how is it possible to organize that kind of a support in a very quick time?”

“This is a matter of credibility, it did not happen overnight”, Ay explains. “We learned that no one would help us. Now we are well aware that we have to heal our scars ourselves. We have no friends but ourselves just like we have no enemies but ourselves. We all know the difficulties we face. We are aware of the importance of solidarity. Therefore, everyone takes on responsibility willingly. 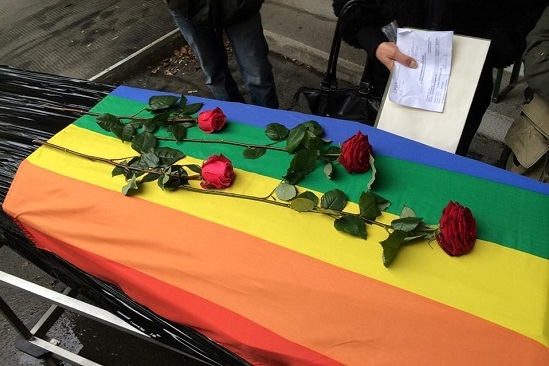 Another trans shelter will be opened in Izmir

Ay also announces the good news that the remaining amount of money collected for Oncu’s body will be used for a trans shelter to be opened after Oncu’s name:

“Thanks Allah, we collected about 12,000 Turkish Lira (about 4,250 Euro) in 2 hours for the funeral. The remaining amount will be used to improve the [trans women’s] graves. After that a trans guesthouse will be founded in Izmir. The work for that has already started. We are now searching for a house. The soul of solidarity, the soul of Trans Angels should be kept alive.”

Oyku Ay finalizes her words with her motto: “May Allah be our lover and guide.”