Facebook is a predator of freedom of speech in Turkey

Turkish government, one of leading violators of freedom of expression, particularly on the Internet, has been pushing major international social media outlets to open offices in the country for two main reasons; to make them pay taxes and more importantly to create a more accessible channel for its censorship requests. Youtube, Facebook, Twitter, Dailymotion, Vimeo, Reddit and Grindr, among others have been blocked at least once in Turkey; while 105,958 web pages, including dissident news outlets are blocked as of 16 December 2015, according to EngelliWeb a web site tracking net censorship.

Facebook is one of the first major networks to cave in to Turkish government’s incessant pestering. This is hardly surprising as the users from Turkey is a huge asset for the company. According to Internet World Stats out of around 46 million Internet users in Turkey, 41 million users have a Facebook account. 85% of these are also mobile users and 65% check Facebook every day. Meanwhile, Turkey’s AKP government has also the habit of checking (others’) Facebook everyday. According to Facebook’s own “Government Requests Report,” in January-June 2015 period, Turkish government requested personal data of 475 users, 368 of which were granted to them by Facebook. Also 4,496 content removal requests were approved. These figures ranks the Turkish government second in the world as a predator of Facebook freedom, after the Indian government.

Nevertheless, government intervention on Facebook users’ data is just one side of the coin. Facebook itself carries out a completely arbitrary form of auto-censorship on the content shared on its website. In Turkey, this usually means unwarranted removal of anything that could remotely irritate Turkish government and its Islamist-conservative policies. In September 2013, right after the summer of massive street protests in Turkey, a group of academics led by Erdem Yörük started a petition protesting Facebook’s removal of anti-government, dissident and pro-Kurdish pages. The signatories also requested transparency on Facebook’s Turkey desk, rumoured to be located in the Facebook HQ in Dublin, Ireland.

After this petition, things even got worse. Pınar Aydınlar, folk singer and HDP’s (Peace and Democracy Party - pro-Kurdish, socialist) Istanbul mayor candidate, stated that her Facebook profile was removed twenty times and her fan page was also censored. In July 2015, in an even more Kafkaesque example, Facebook censored the Bianet newspiece on censorship of the LGBTI community page KaosGL. According to a recent LGBTI Internet freedom report by KaosGL, Facebook also pursues a real name policy forcing transsexual individuals to use their birth names and “restricts the LGBTI people’s right to share in social area and rights to communication in a country where LGBTI people are forced to live without outing themselves.”

While Facebook systematically removes dissident and pro-LGBTI content from the users’ pages in Turkey; it should be underlined that this policy is a one way street. Ultra-nationalist Facebook pages and users openly promoting violence are almost never subjected to same diligence in terms of content control, even if the content is flagged as inappropriate. Images and messages of extreme, graphic violence and hate against Kurds, Jews, Armenians and LGBTI are without exception overlooked by the Facebook Turkish desk. If you ever decide to report this kind of content, you instantly receive the infamous message. 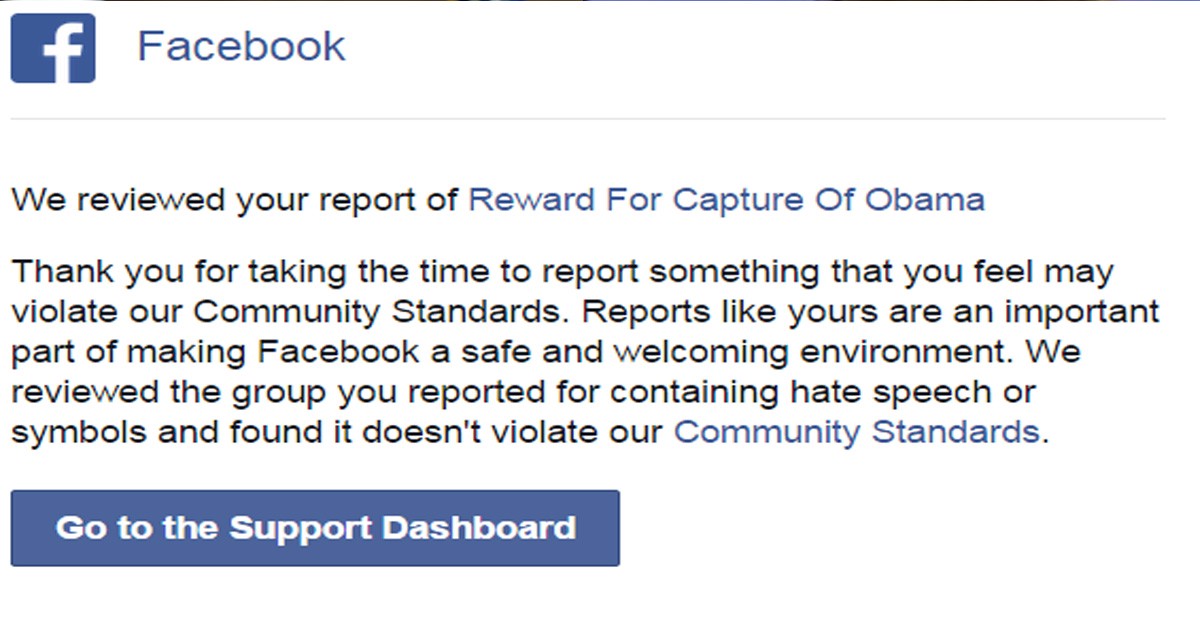 Of course when you flag a Turkish hatemonger, you receive this message in Turkish 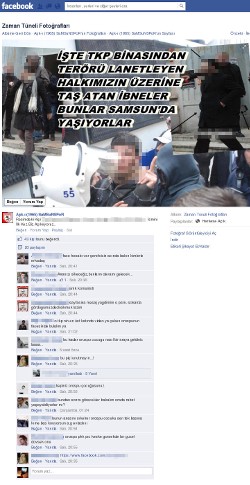 “You won’t be able to live here any more freely” = NO HATE SPEECH, NO INCITEMENT TO VIOLENCE

In one of the umpteen examples on Facebook’s sponsorship of chauvinistic hatemongerism in Turkey, in Samsun (Northern Turkey) an ultra-nationalist mob shared the photos of Turkish Communist Party (TKP) members and asked for a gathering to lynch them. Facebook refused to remove this post as “it did not contain hate speech.”

In another example, one user says “K*rds [sic] are not a nation, they are not even human.” Message flagged, no racism found. 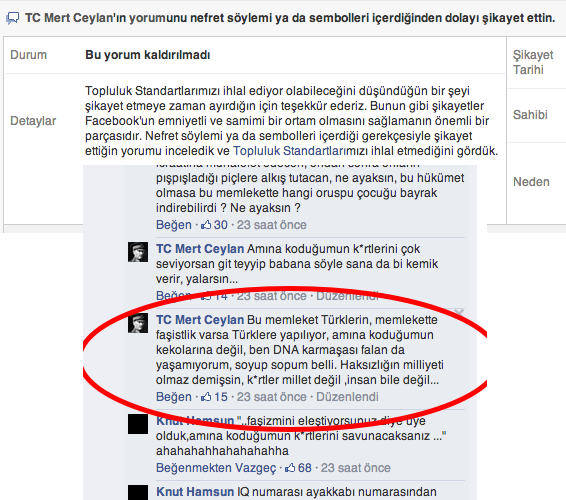 “Kurds are not even human” = WHAT RACISM?

Gay bashing is also a free pass for Facebook Turkey. The page “Kurdish LGBTI in Turkey,” run by notorious gay basher “psychologist” Hüseyin Kaçın promoting “being gay is a paranoid disease, that needs to cured” (by paying Kaçın) is still active, after being flagged several times. The page also insults centre-left CHP’s gay mayor consultant Boysan Yakar, who passed away in a car accident in September, by calling him “an outrageous faggot” in a post written after his death. 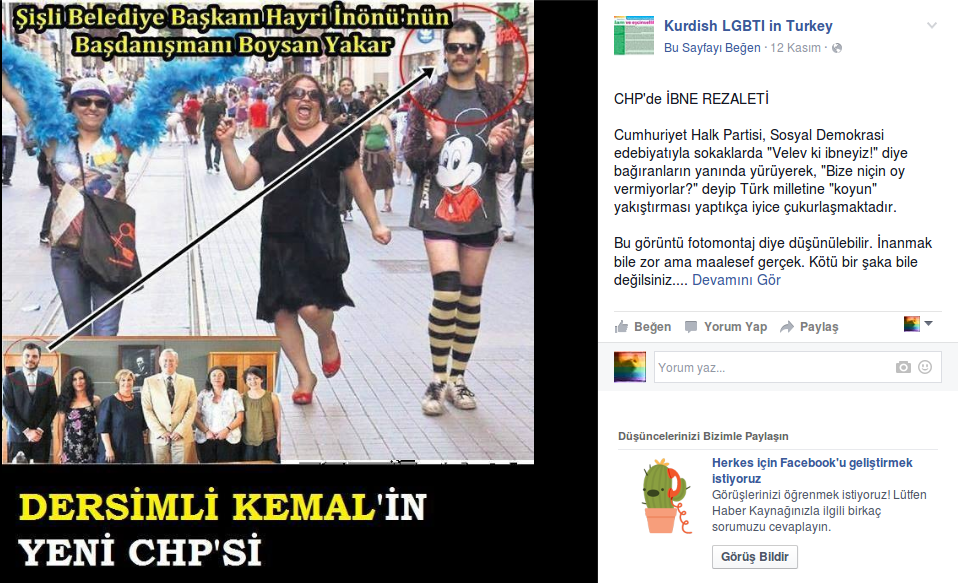 You can attack dead people on Facebook, as long as you are a pro-government gay basher

You may think Facebook’s chauvinistic practices on users in Turkey may have resulted from lack of leadership, unfamiliarity to the country or arbitrariness of some low-level employees. Guess again. Facebook’s Turkey country manager Derya Özkaya Matraş, a Columbia graduate, former vice president of Doğan Media Group (one of the largest in Turkey), based in London probably with a very handsome salary, is in charge of this operation. Make no mistake, Facebook’s iron-hand against dissidents, Kurds, LGBTI and kiddy gloves towards ultra-nationalistic gay bashing mobs is an everyday practice; and it is, in no uncertain terms, supervised.

Facebook is probably the most representative social networking site if you want to get to know what Internet users in Turkey are up to. Evidently, it is also very explanatory if you need to learn how things work in the country.