This year too, Pride Week is being organized through crowdfunding and awaits everyone’s support. 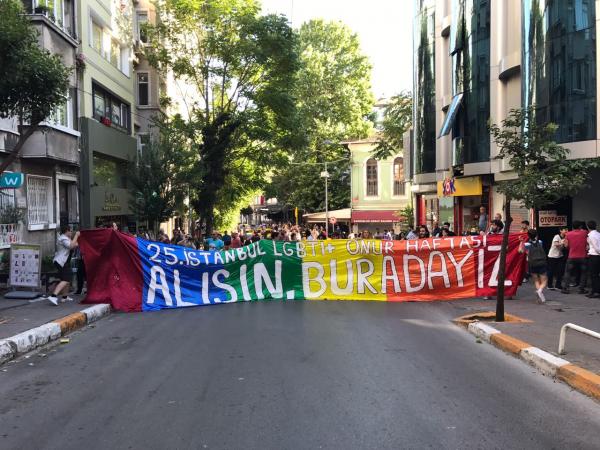 Last year, the Istanbul LGBTI+ Pride Week was comprised of over 50 events organized with a crowded group of volunteers. This year too, Pride Week is being organized through crowdfunding and awaits everyone’s support.

Every year, the Istanbul LGBTI+ (Lesbian, Gay, Bisexual, Trans, Intersex and Plus) Pride Week is organized by an independent group of volunteers responding to an annual call and modelled on an anti-hierarchical solidarity maintained each year with a new boost of energy. This year the 26. Istanbul LGBTI+ Pride Week will take place between June 25 - July 1, 2018.

Like previous years, this year’s Pride Week volunteers invite everyone to support the organization through crowdsourcing in order to cover the expenses. Those willing to support the Pride Week can join the campaign on the Indiegogo website and donate the amount of their choosing.

Pride Week Volunteers say “Even though we were not able to realize our walk due to the police intervention last year, we did come together in different places across the city through Pride Week activities and strengthened our struggle by coming into contact with each other. This year too, we need your support to come together and to organize our activities in spite of all the bans and of the shadow cast by these bans”.

Pride Week’s theme will be “Boundaries”:

“We proudly declare the theme for 26.Istanbul LGBTI+ Pride Week which is to take place between June 25- July 1 in its 26th year, in spite of incessant bans and increasing pressure: Boundaries!

“We call on to you to discuss, rethink, talk about and to enhance the meaning of the word “boundary”, a word which we approach within the boundaries of thinking and writing.  We make this call because we do not accept the boundaries drawn against our identities, orientations and existences. We come together, rising from the spaces we are sought to be constrained in, by those who isolate us from the public space saying “Do whatever you want, but behind closed doors”. We know how important it is to erase the boundaries put against love, pleasure and sharing; in spite of those who remain silent to harassment, rape, torture, and violence which recklessly roam the streets.

“We make this call because we want society to be aware of the intersex individuals whose bodies are violated in their early ages, in an effort to make them “fit” the social norms. We stand against those who restrain us within the boundaries of the binary gender regime to protect their own power positions, we say “we are here” against those who avert their gaze from us, thinking we are “different”.   We show that countless queer gender identities and sexual orientations exist, against the boundaries that limit the number of the identities, orientations and existences. We shout out that asexuals, aromantics and many others exist.

"In Istanbul we protest the Governorship of Ankara’s ban against LGBTI+ activities for an indefinite period,  and we mock their boundaries. As we have been saying for the last 25 years: We do not want the ghettos we are imprisoned in but the entire cities! To those who think they can put boundaries on our solidarity and resistance by incarcerating many trans friends like Diren who made her voice heard by her hunger strike, demanding a humane treatment in prison, we raise our voices with our hunger and our letters. We win back the pride of a dignified life.

“This year in Pride Week, want to make invisible boundaries seen and to fight with all our might against these boundaries set to the advantage of those in power. We are fully confident that we can set our own boundaries against those who foster the hate speech against our lives, our bodies, our feelings, and that we will break their unbounded confidence.”

In the past Istanbul Pride Week has been organized under various themes, such as Caution! Family, Taboo, Memory, Resistance, Contact, Normal, What’s Between Us. Throughout the Pride Week, we will seek different methods of resistance and ways of building a stronger solidarity with forums, panels and film screenings focused on the subjects of the LGBTI+ movement’s agenda.

Through the week, within the scope of public and free events, there will be panels, workshops, film screenings, theater plays, picnics and a gathering of LGBTI+ organizations from other cities. Activists, LGBTI+ organization representatives, MPs, representatives of foreign consulates as well MPs and activists from abroad will attend the events as participants and speakers.

This year as it turns 14, Genetically Modified Tomato Awards will make a public call to vote for the most LGBTI+phobic discourses.