Between ten and fifteen thousand people marched this past Saturday in the second edition of the Czech Republic’s capital city pride.

Between ten and fifteen thousand people marched this past Saturday in the second edition of the Czech Republic’s capital city pride.
On August 18th, between ten and fifteen thousand people marched in Prague as part of the culminating event of a weeklong series of activities denominated “Prague Pride”. Being in its second edition, the 7-day celebration was filled with entertainment, debates, concerts, exhibitions, theatre, and all kind of activities aimed at representing the Czech LGBTQ community in its full color and diversity. 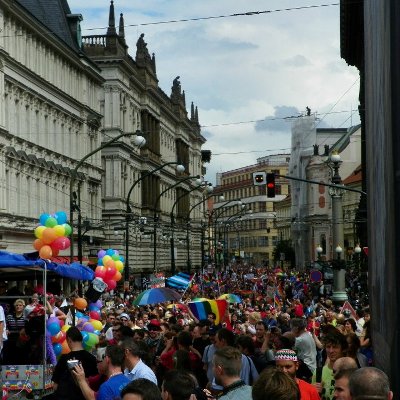 The theme of this year’s festival was titled “Bringing our colors together”, which aimed to introduce the general public to the LGBT communities that are usually hidden from the public eye, such as LGBT Roma, disabled or transgender persons.
The march went through some of the most important avenues of Prague and included slogans calling for the respect of gays, lesbians, bisexuals, and transgender individuals.
Anna Grodzka, the Polish politician who last year became the first known transsexual parliamentarian in the history of Europe, was in charge of the opening ceremony. Other important figures included the ambassador of the U.S. to the Czech Republic, Norman Eisen, also took part in the march.
In March 2006, the Czech Republic became the first country from the ex-Socialist bloc that passed legislation for the protection of LGBTs in the country. This increased openness can serve as an example to some of its Eastern European neighbors where the rights of this community are still at risk (ex. Hungary, Poland, Belarus, etc.).