6 countries at the 2nd Symposium Against Discrimination

6 countries will be present at the 2nd Symposium Against Discrimination organized by Kaos GL Association. 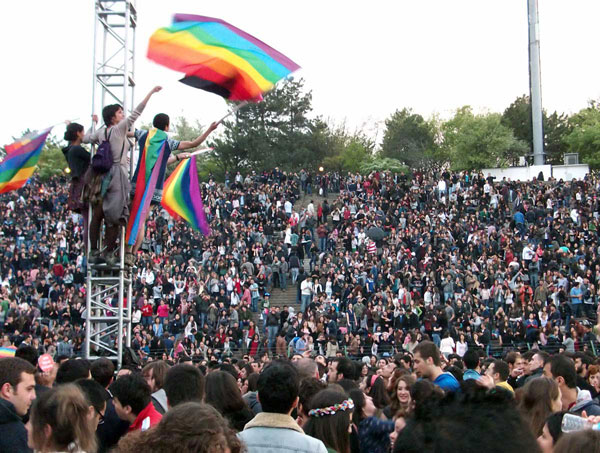 6 countries will be present at the 2nd Symposium Against Discrimination organized by Kaos GL Association.
Targeting strengtening forms of solidarity and the human rights movement, the Symposium will host guests from academia, politics and civil society in Ankara.
LGBT activists from Belgium, Germany, the Netherlands, Ireland, Switzerland and Sweden will be in Ankara to speak and debate on sexual diversity and ways of combatting discrimination in education, school bullying and other intersectionalities of discriminations in education. The opening will take place on December 13th at 13:00 at Çağdaş Sanatlar Merkezi (Contemporary Arts Center). Dominic Hannigan from Irish Labour Party will get together with parliamentarians from the Turkish National Assembly.
To bring visibility to the forms of violations and discriminatory treatments that LGBT students face in education and to debate on the social rights of LGBT society in general, the Symposium chose “Right to Education” as its main title in 2013.
Struggle and Politics Against Homophobic and Transphobic Discrimination
Moderated by Murat Çekiç, director at Amnesty International Turkey, “Struggle and Politics Against Homophobic and Transphobic Discrimination” panel will take place on December 13 between 15:00-16:30.
Sophie Aujean from ILGA-Europe in Belgium,  Ulrich Klocke from Berlin Humboldt University in Germany and Peter Dankmeijer from Global Alliance for LGBT Education (GALE) in the Netherlands will be the speakers of this panel. Their speeches will tackle the following:
Sophie Aujean, ILGA-Europe, Belgium
“ILGA-Europe, the European region of the International Lesbian, Gay, Bisexual, Trans & Intersex Association, is increasingly working at raising the awareness of professionals in areas like health, education, employment or justice, on specific issues faced by LGBTI people. This presentation will provide information on the issues and difficulties experienced by LGBTI people in their daily lives, in particular in the fields of health and education. It will also provide examples of good practices that can help to overcome those barriers, either in relation to legislation and policies or in more practical terms (tips and advices).”
Ulrich Klocke, Humboldt Berlin University, Germany
“Dyke! Fag! So gay!“: How can we reduce homophobia and transphobia of children and adolescents?
“Two of five sixth graders in Berlin use „lesbian“ or „dyke“ as an insult, three of five use „gay“ or „fag“. This is a result of a survey of 787 students of 24 sixth and 26 ninth/tenth graders in 20 schools of Berlin. Students’ and teachers’ behavior towards lesbians, gays and gender-nonconforming students was assessed by peer reports, attitudes by self reports and an implicit measure, and knowledge by a multiple choice test on sexual diversity.
Multi level analyses demonstrate that teachers are able to reduce homo- und transphobia and promote acceptance of sexual diversity: The more often they have addressed lesbian and gay issues towards their students and intervened against discrimination, the more positive are their students’ attitudes to LGBT and the more their students know about sexual diversity. By contrast, the more teachers have made fun of lesbians, gays and gender-nonconforming students, the more their students’ discriminated themselves. The study also showed a helpful effect of a school’s anti-bullying policy: Students who know about this policy have more positive attitudes and behave more supportive towards lesbians and gays.”
Peter Dankmeijer, Global Alliance for LGBT Education (GALE), the Netherlands
“Right to Education”
“Peter Dankmeijer, director of the Global Alliance for LGBT Education (GALE), gives an overview of what the human right to education is, how it is subscribed to by States and how it is monitored. He will also point out how education and the formal right to education is relevant for LGBT people and possibilities to advocate for improvement. He will make a distinction between different strategies in denying States, ambiguous States and supportive States and give examples.”
To contacts the organizers of the Symposium:
Kaos GL Derneği
GMK Bulvarı, 29/12, Kat:6, Demirtepe/Kızılay - Ankara
Phone: 0312 230 0358
Fax: 0312 230 6277
kaosgl@kaosgl.org
The 2nd Symposium is supported by German Embassy, Swiss Embassy, Norwegian Embassy, British Embassy, Irish Labour Party, Sivil Düşün Initiative and SIDA Sweden.