After year and half, LGBT activist Cimbaljevic walked through his born town Niksic again

LGBT Forum Progress praises the acts of two elder citizens who without any fear approached Cimbaljevic and shook hands with him, risking their own security by doing so. 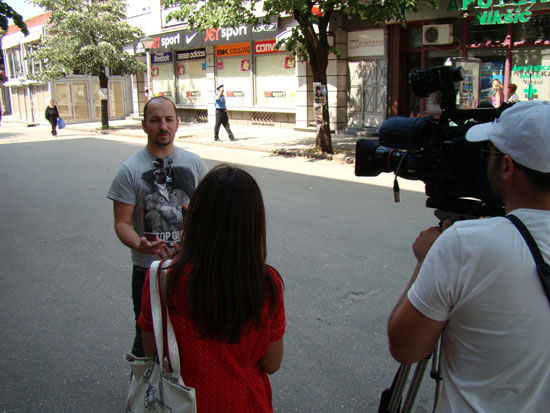 Executive director of the LGBT Forum Progress Zdravko Cimbaljevic, today, after a year and a half, took a walk downtown Niksic accompanied by the crew of the Serbian television “Prva” and by the plainclothes police officers.
The editors of the TV show “Explosive”, which is a show on the “Prva” TV, have expressed the wish that the interview with the first publicly declared homosexual takes place in Niksic, his home town, in which homophobia slightly more pronounced than in the rest of the country. After the consultations with the police and within the LGBT Forum Progress, the idea was accepted, especially in order to check the police capacities and the safety of the publicly declared LGBT persons in the country.
During the extremely short walk on the Niksic promenade, several dozen people, who was mostly having a drink in the nearby coffee-shops addressed profanities and derogatory words towards Cimbaljevic. Among other things the guests of the restaurants and coffee-shops along the promenade were saying : “Get out of here”, “ Did you come to conquer the city”, “Faggot”, “May Cimbo fuck you”, “ Fuck that cameraman next to you”, “Why did you come here?”, “You are so pathetic because of those who you protect” (referring to the police officers), “If Milo came, he wouldn’t have this much security” etc…
Besides the aggressive rhetoric and not so pleasant situation, in which the journalists of the “Prva” TV and Zdravko Cimbaljevic were caught, LGBT Forum Progress considers the fact that no one chose the physical violence very positive. It gives the hope that the conditions will be gradually made that Niksic will also join the cities in which it is possible to live freely regardless of ones sexual orientation or gender identity. LGBT Forum Progress praises the acts of two elder citizens who without any fear approached Cimbaljevic and shook hands with him, risking their own security by doing so.
LGBT Forum Progress praises the professionalism of the Police directory and the will of the police officers to provide safety and dignity to every citizen of Montenegro regardless of their difference of any kind. Fighting against discrimination and humiliating treatment together with the ensuring the freedom of motion represent the values on which Montenegro, when it comes to LGBT persons, needs to work with much more energy, effort and consistent devotion. The freedom of motion and the absence of discrimination on any grounds represent one of the leading values of the European Union which just opened the accession negotiations.
Photos: http://lgbtprogres.me/en/2012/07/nakon-godinu-i-po-dana-cimbaljevic-po-prvi-put-javno-u-nik%C5%A1i%C4%87u/