An anti-homophobia conference was held in the southeastern city of Batman on Saturday. 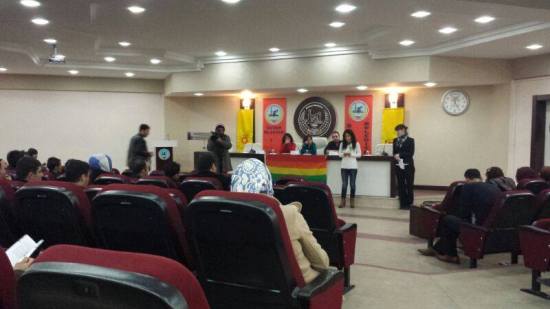 An anti-homophobia conference was held in the southeastern city of Batman on Saturday, 11 January 2014, as part of the 9th International Anti-Homophobia Meeting.
The event, hosted by Education and Science Workers’ Union Eğitim-Sen’s Batman branch and attended by 60 educators, was held in the Batman City Hall Auditorium.
The conference, which tackled issues of sexual orientation, gender identity, and discrimination, began with an introduction of the terms lesbian, gay, bisexual, trans, and intersex. Remzi Altunpolat, from the Kaos GL Association, then examined heterosexist socialization and homophobic and transphobic practices in the field of education. In the second part of the conference, counseling psychologist Berna Savcı took questions from the audience and focused on their experiences in schools. Educators reported difficulties reaching out to families and students residing outside of metropolitan cities due to experiencing problems with their locations.
The local events by the International Meeting against Homophobia are supported by the Canada Fund for Local Initiatives, the Norwegian Embassy, and the Rainbow Solidarity Foundation.
Translation: LGBTI News Turkey