Athens Pride as well as LGBT society in Albania and Macedonia showed solidarity with the demonstrators in Turkey.

The city of Athens hosted the Athens Pride 2013 on June 8, Saturday. With the slogan “Athena is ours”, the pride gave special priority to the visibility of migrants in Greece. The slogan “Athena is ours” was translated into Bulgarian, Urdu, Turkish, Arabic, Georgian, Armenian, Montenegrin, Hebrew, Serbian and Albanian.
Around 15.000 people have joined the Pride marching. Due to the recent uprisings in Turkey, the pride also hosted additional posters that said “Occupy Fear”.
Split Pride for the 3rd time!
Split Pride took place for the 3rd time on 8 June 2013 in Croatia. Over 500 participants marched in the city of Split. Two ministers from the government, Minister of Foreign and European Affairs Vesna Pusic and Minister of Administration Arsen Bauk, participated in it.
Macedonia marched against Turkey’s police brutality
Macedonian LGBTI Support Center and members of Macedonian human rights movement organized a marching on June 8 against police brutality. The marching was dedicated to a boy who was killed by a police officer, one of the bodyguards of the Prime Minister. This turned into a case where the institutions tried to hide the murder. The reaction of public on the steets lasted for almost a month. It was the 2nd anniversary of his death.

The day was commorated to him and also the march and the press supported the demonstrations in Turkey and protested police brutality.
Albania in solidarity with LGBTs in resistance
LGBT organisations in Albania Pro LGBT Albania, Alleance and Pink Embassy organised a marching on June 6 in dedication to the protests by the youth in Turkey.
The most recent edition of the Albanian weekly political magazine JAVA also did a special coverage of the unrest in Turkey. 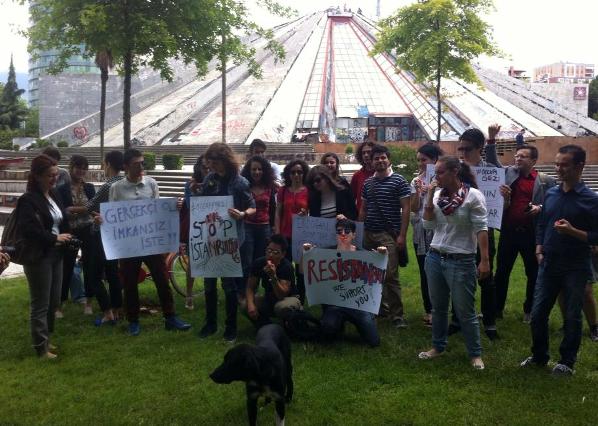 “Now it is our time to be!”
VOID NETWORK / “Theory, Utopia, Empathy, Ephemeral Arts” has declared its support in Turkey and everyhwere in the world fighting against oppressive regimes.
The call of the network said: “And we will be not as ‘peaceful, law-abiding and loyal citizens’, not as mesmerized faithful to the commands of Power, not even as ‘citizens’ for, in the usual manner of the oppressors, you misrepresented the term ‘citizen’ and you made it synonymous to apathy, submission, egoism, and individualism.”
We only exist as humans, as collective individuals, as members of a society who almost forgot what it means to communicate with each other. We only exist, that is, only as communities of free people, who want to self-governed and to administer our world in common and we know that we can do it based on three basic values: Mutual aid, self-organisation and anti-hierarchy.”