Athens Pride is this Sunday! 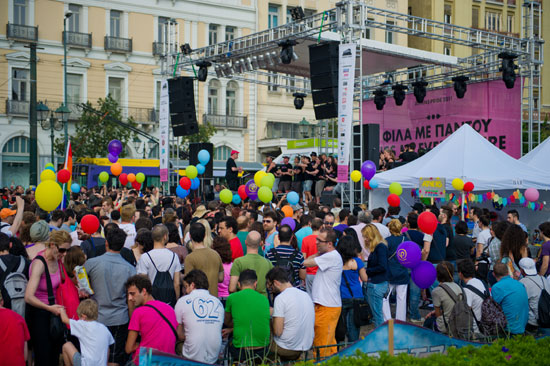 Athens Pride 2012 will take place in June 9 at Klafthmonos Square. Athens Pride started as as small grassroots initiative gathering a few hundred activists in 2005 and quickly grew to become one of the most popular and most significant all day events of the city. With a parade attracting over 12,000 people in 2011, it is the largest pride event in SE Europe. Regardless of this growth and success, Athens Pride retains it’s grassroots, all volunteer, non-profit character.
Andrea Gilbert, InterPride Region 15 Director from Athens Pride Organizing Committee, spoke to kaosgl.org about the Pride in 2012: “In the 8 years that Athens Pride has existed, we have seen the numbers grow from a very reluctant 500 to 12,000 last year. This is amazing for us. It took years for people to want to come out in the daylight. Even now, you’d be surprised how many LGBTs don’t want to participate because they don’t want to be "characterized".”
“We now have over a hundred young volunteers, and more keep offering each hour. Many of these kids have never even been to Athens Pride before! Athens Pride has changed the lives of so many young people. It has given so many people, young and not-so-young, the courage to come out to friends and family - to feel comfortable about their sexuality. When we read the posts and blogs the next day, and when we see all the happy faces, it makes all our hard volunteer work worth every moment of anxiety and exhaustion. It’s an amazing feeling for us and for everyone involved!”
Athens Pride is unlike any other in many ways. For the past 3 years an auction named "Artists for Athens Pride" has provided most of the funding for Athens Pride, enabling it to produce free public cultural and political events that are enjoyed by thousands. This extraordinary display of sensitivity and conscience on the part of artists in Greece and abroad has made Athens Pride unique, as the only Pride in the world to be primarily supported by the visual arts community! Join the event and help make history with the largest LGBT Pride event in SE Europe!