The main program of Kaos GL’s 9th International Anti-Homophobia Meeting took place on May 17 and 18 but there were many other events before that.

The main program of Kaos GL’s 9th International Anti-Homophobia Meeting took place on May 17 and 18 but there were many other events in Ankara before that. Here is the diary of the 9th meeting which kicked off on May 5:
May 5:
Umut Guner of Kaos GL Association became a guest in Gulsum Depeli’s “Intercultural Communications” course at Hacettepe University.
Those who stand against homophobia and transphobia learned basic flamenco figures at Yapi Sanat.
May 7:
Kaos GL Association Advisory Board Member Idil Engindeniz became a guest in Simten Cosar’s “Media’s Public Sphere/Spheres? – Opposites Public Spheres” course at Hacettepe University.
May 8:
Ali Erol and Ezgi Kocak of Kaos GL Association became guests in Simten Cosar’s “Media and Social Movements” course at Hacettepe University.
May 10:
Bonnie Li, a performance artist from France, took her “passengers” for a flight at Noxus.
Kaos GL Association and Amnestry International Turkey organized a workshop, bringing NGOs working on refugee rights together to tackle the problems of LGBT refugees.
The movie “Who’s Afraid of Vagina Wolf?” was displayed at Flying Broom Film Festival’s section “Beyond Pink and Blue”.
May 12:
Ankara premiere of the movie “Trans X Istanbul” took place at Ankara University’s Cebeci Campus. 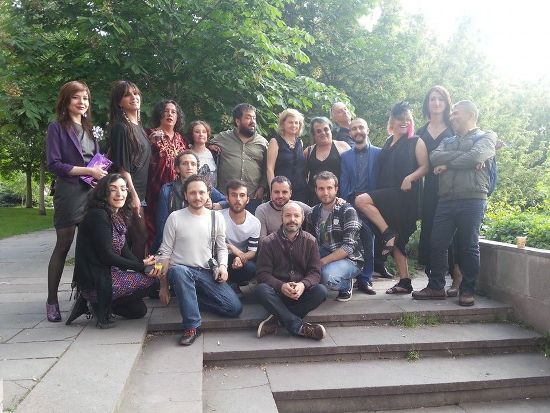 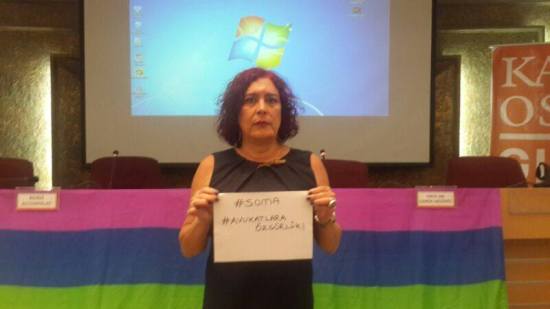 #SOMA #FREEDOM TO LAWYERS (After lawyers who wanted to help the families of the victims were arrested in Soma)
Prof. Dr. Samim Akgonul from Strasbourg University analyzed the concept of minority rights through LGBT groups.
Author and journalist Kursad Kahramanoglu discussed the changing family structures and whether gay couples can be an alternative to the conventional family.
May 18:
Queer theorist Jack Halberstam made a presentation on new ways of protest and what anarchy would mean now.
The march against homophobia and transphobia was dedicated to Soma and victims of labor accidents.