Discriminative practices of Şahin, the re-elected president of Radio and Television Supreme Council of Turkey 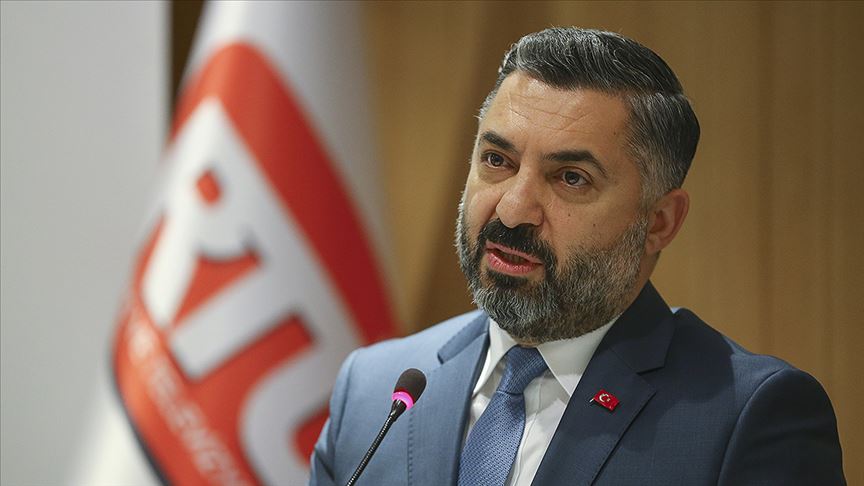 Radio and Television Supreme Council of Turkey (RTÜK) convened for elections due to the end of Ebubekir Şahin's 2-year term.

Presidential and Deputy Chairman elections were made in the Upper Council. As a result of the vote, Ebubekir Şahin was once again elected as RTÜK president. Arif Fırtına was elected as vice president of RTÜK.

Şahin said, "The national and spiritual values will continue to be carefully protected in this new presidential term".

During Şahin's two-year presidency, which began on January 23, 2019, censorship and hate speech against LGBTI+'s reached to new peaks. Here is a compilation of some of the RTÜK's practices during the Şahin period.

Countless discrimination and censorships of RTÜK

*In April 2019, RTÜK suspended the show "9-1-1" for three times. Anadolu Agency (AA) announced RTÜK's decision with the following statements: "The Upper Board, which assessed the series "9-1-1" of FOX Life, believed that the indecent images of an elderly male couple in the series were contrary to the national and spiritual values of society, general morality and the principle of protection of the family. RTÜK imposed a 3-time program stopping penalty on FOX Life, which aired "9-1-1", for normalizing same-sex relationships." In September 2019, RTÜK sentenced the same series to stop the airing, this time on the grounds of "covering a homosexual relationship". Faruk Bildirici, a member of the Upper Council, voted against RTÜK's decision. Punishment on the grounds of "covering a homosexual relationship" is outright discrimination, Bildirici said. At a meeting on October 31st, RTÜK voted 2 to 6 to drop Faruk Bildirici's membership. The justification of this decision was explained as "the actions and rhetoric put forward by Bildirici". Faruk Bildirici was elected to RTÜK on July 12, 2019, from the Republican People's Party (CHP) quota.

*"We are determined not to give way to immorality," RTÜK President Ebubekir Şahin told Akit in April 2020 about the series Love 101. A post that says "We are dark people under a colorful rainbow! Osman?" regarding "Love 101", the 3rd Turkish production on Netflix posted on Twitter account @love101netflix, has become the target of hate campaigns on social media and made entry to RTÜK's radar. RTÜK President Ebubekir Şahin said, “We warned, our eyes are on them. It is not possible to overlook the content of publications that may adversely affect the physical and mental development of children and young people. Our red lines are obvious. As RTÜK management, we are determined not to pass any content that would disturb our society” to Akit newspaper regarding the TV series with only a released trailer.

Reactions to Şahin's discriminatory statement came immediately. Kaos GL said "We urge all public, especially other members of RTÜK, to react to these censorship calls and LGBTI+ opposition. We urge the President of RTÜK to apologize for his discriminatory statements, to stop using RTÜK as an LGBTI+phobic censorship tool and to act as a mechanism to control human rights violations of public institutions, and to take action against this discrimination", while the İzmir LGBTI+ Pride Week Committee said, "This implicit censorship of LGBTI+'s in the series must end".

*In July 2020, it was revealed that another series had also been censored after AKP Deputy Chairperson, Head of Publicity and Media and Kahramanmaraş MP Mahir Ünal's statement to BBC Turkish, and a senior RTÜK official's, who did not want to be named, confirmation of the homophobic censorship on Netflix's Turkish series Love 101.

Journalist Cüneyt Özdemir wrote on his social media account on July 18 that Netflix had enough and stopped filming series in Turkey:

"The negotiation between Netflix and the AKP ended. Netflix had enough with the AKP's censorship of homosexuality. Netflix stopped filming shows in Turkey, refused to accept censorship. Will Turkey be the first and only country in the world to ban Netflix?

"What was the negotiation between the Ministry of Tourism, Rtük and Netflix? Which series was asked to be changed? How many Netflix series did RTÜK want to censor?

“How did Netflix came to the point of no return?”

Haberturk columnist Fatih Altaylı wrote in his column on July 18th that the Turkish production Netflix series was canceled as a result of RTÜK's intervention. According to Altaylı, the first part of the script was sent to the ministry, as permission from the Ministry of Culture was needed for foreign productions to be carried out in Turkey. The pandemic came in. When life returned to normal, permission is requested again. The Ministry wants the script of another episode. In the second episode, there's a gay character. The Ministry then invites Netflix executives to meet. However, RTÜK says" "You need to talk with us too" and says "Remove the gay character from the show".

Ece Yörenç, the creator and screenwriter of the series, confirmed the censorship of the series "If I Knew Then What I Know Now", directed by Cağan Irmak and Umut Aral, produced by Netflix and Ay Productions in Turkey. In a statement to Altyazı Fasikül magazine, Yörenç said that "filming of the series is not allowed due to gay characters and this is very scary for the future". On the other hand, Yörenç said the reports in the press that a gay couple had a sex scene were not true, noting that the character did not have any physical contact in the script and the series was not allowed to shoot despite that.

Ece Yörenç also said that they accepted the censorship request and to remove the gay character from the script, but Netflix officials decided to cancel the series after a meeting with RTÜK on July 14, 2020.

Özdemir also explained the background of the censorship during a live broadcast on his Youtube channel. Cüneyt Özdemir said on Youtube live that RTÜK told Netflix officials that there are "gay characters" in nearly 40 series and that they want to interfere with these productions too. According to Ozdemir, Netflix officials left the table upon this.

*RTÜK issued an administrative fine for allegedly "disrupting the social structure" to the story of two female parents in the "Extraordinary Pregnancies" program on TLC in August 2020. In the report on TLC, the Upper Board said that "homosexual relationship, which is shown as a model relationship, is contrary to the spiritual values of society". The homophobic ruling said that "presenting two women as parents, having children and describing their experiences during pregnancy processes is disruptive to the gender models and the social structure." RTÜK members issued administrative fines to TLC channel with their personal moral opinions that stratifies society and ignores same-sex relationships.