Empowering Zagreb and Other Parts of Croatia

Organized LGBTIQ movement first appeared after the independence of Croatia and kind of explosion of activism started at the beginning of 21st century by organizing the first Zagreb Pride in 2002 and Queer Zagreb festival in 2003. 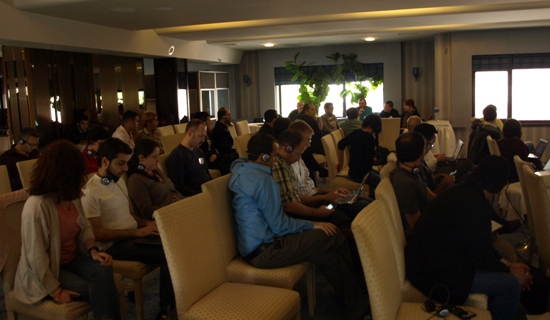 By Gordan Bosanac
gbosanac@zamir.net
Queer Zagreb, Croatia
In 2007, Queer Zagreb has published the first book on history of homosexuality in Croatia entitled “Oral History of Homosexuality in Croatia”. This book, based on interviews with LGBT persons living in Croatia during Yugoslavia, has showed continuous existence of sexual and gender minorities under different political systems. However, organized LGBTIQ movement first appeared after the independence of Croatia and kind of explosion of activism started at the beginning of 21st century by organizing the first Zagreb Pride in 2002 and Queer Zagreb festival in 2003.
What is interesting for Croatian LGBTIQ movement is the fact that since 2002 there has been different methodologies and approaches activism: from human rights to culture. On one hand many steps have been done in legislation, mostly due to EU accession process. However, Croatia was the first post Yugoslavia state which voted for same-sex partnership Act in 2003. Unfortunately, this Act was just a small symbolic victory since the Act guaranties only two rights for same sex couples: right to inheritance and financial support after breaking relationship. What is really funny about it is that one can enjoy the rights only if same-sex partnership fails. State actually accepted the Act which stimulates you more for splitting then sustaining relationship. As one can expect, there has been no records that any same sex couple has used the rights from the Act in the last eight years.
On the other hand, legal progress has been done in anti-discrimination policies. Many anti-discrimination articles were embedded within different legislation and since 2009 Croatia also accepted overall Anti-Discrimination Act which bans discrimination based on sexual orientation and gender expression. Since 2006, Croatian Penal Code has introduced hate crimes, but the implementation of the legislation was lacking due to the general fears of LGBT victims and non trust in the institutions and judiciary. At one point we had this paradoxical situation that legislation was very progressive but no one was brave enough to use it. This is why LGBT groups initiated more activities towards the community empowering LGBT persons to come out and express themselves more openly. It was ridiculous to have legal protection without strong community.
In this action cultural projects have been proven as successful. Queer Zagreb festival continuously was presenting LGBT arts in different forms (theatre, movies, books, exhibition and most important –thematic parties) and empowered domestic queer expressions. Today in Zagreb, one can find vital queer cultural community and many LGBTIQ persons enrolled in cultural queer scene which is still in a sphere of rather independent than mainstream commercial culture. During the years the number of participants at Pride March in Zagreb was increasing which has brought 4000 pride participants at the 10th Zagreb Pride in June 2011. However, this massive response was not the result of tremendous public support to LGBT rights in Zagreb but the reaction on Split Pride which took place only 2 weeks before Zagreb. Split is the town on Croatian coast which in the last 20 years got the label of extremely conservative town. In June 2011, the first Split Pride was organised and provoked extremely violent reactions. Around 10000 anti Pride protestors were attacking the Pride. After Split Pride, reaction from the media was fantastically supportive towards LGBT communities, and many public figures, decision-makers and politicians condemned loudly the violence. This has resulted with massive support at Zagreb Pride.
Even more important is the feeling that more and more LGBT persons are ready to report discrimination and violence and LGBT groups have organised legal and psychological support for the victims. Particularly, younger generations living in Zagreb are every day more open about their sexuality. The problem stays in the fact that some kind of openness has been achieved in Zagreb capital, but in other parts of Croatia LGBT communities are still invisible.
Although the progress has been done in legal protection of LGBT persons, we are still witnessing a lack of more political support towards a better protection of sexual and gender minorities. One of the examples is the recent change of Croatian Constitution (due to the EU requirements) when LGBT groups were lobbying for recognition of sexual orientation and gender expression in the constitutional article which prohibits discrimination. Although social democrats have supported the proposal in final negotiation with conservatives they gave up from the proposal.  After this failure, we came with idea that LGBTs should be perceived rather as national than sexual minorities since national minorities (due to the recent ethnic conflict) have better legal protection. We do have a (rainbow) flag and (Lady Gaga?) anthem but the only thing which is missing is a State! Our proposal would be that Croatia becomes the first state which claims full citizenship based on “LGBTIQ nationality/identity”. Due to the poor demographic growth, this is a way how we can significantly increase the State population. If the human rights arguments can not be heard, maybe this approach will have more response within Croatian policy makers. Until then, LGBT rights will be only the meter of barging and branding between non existing left and right.