End to the undeclared war against LGBTI’s in Kyrgyzstan too! 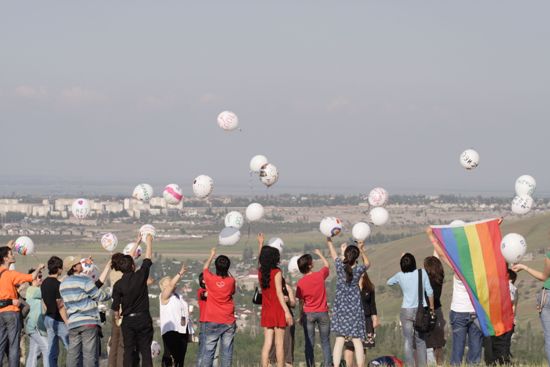 Kaos GL and Pink Life LGBT wrote a letter to Kyrgyzstan Embassy about the anti-gay laws adopted recently:
On 15 October 2014, the Parliament of Kyrgyzstan adopted, in its first reading, much harsher version of Russia’s "gay propoganda" law. Meanwhile, 3 activists in Moscow got arrested due to the fact that they attended protests to show their solidarity with the Kyrgyz LGBTIs.
79 members of the Kyrgyz Parliament voted in favor of the Russian-like anti LGBTI law prohibiting "promotion of non-traditional sexual relations" while only seven deputies voted against it.
The bill anticipates imprisonment for people who "has a positive attitude towards non-traditional sexual relations". According to the Bill, both activists working on sexual orientation and gender identity, and the journalists bringing human rights violations in the field of sexual orientation and gender identity to the forefront will be punished with imprisonment up to 1 year. Once the new Bill becomes the law, the advocacy activism of the county’s LGBTI organization, Labrys, will be banned.
Your decadence is non-traditional!
Homophobic incentives have promoted their heterosexist ideologies in similar ways throughout the world. They claim that their bias and ideology-based discriminative practices are shaped by social norms and acceptance. We want to remind Kyrgyz legislators and authorities of two points that they should never forget.
There are LGBTIs in Kyrgyzstan society, get over it!
As happening throughout the world, in Kyrgyzstan, people give birth to LGBTI children and these children grow up and live as part of the society. Nowhere in the world is exempt from the LGBTI reality. States are primarily responsible for providing equal services and rights to their LGBTI citizens. They have to respect LGBTI organizations’ freedom of assembly and freedom of speech merely compensating for the lack of social services in a particular country.
Heterosexism is an ideology
The so-called "tradition" as claimed by the legislators in Russia and Kyrgyzstan is not natural or given. Heterosexism has been consciously promoted both in the Soviet Union and post-Soviet Union era. It is also a vicious dilemma to seek the roots of discrimination in the society while discrimination is being imposed by the heterosexist patriarchs. Heterosexism has always existed as the greatest opium of the people.
Withdraw the bill!
You ignore the fact that LGBTI people whose rights will be damaged once more by this anti LGBTI law are your citizens. States are obligated to protect their citizens’ rights. LGBTIs coming from different class backgrounds have the same right to access human rights. The current law would bring nothing but a threat to social peace. Thus, in order to maintain social peace we hereby call for Kyrgyzstan legislators to withdraw the bill for the sake of Kyrgyz LGBTIs! It is everybody’s right to live in freedom and equality throughout the world!