‘Gay cure" therapies damage self-esteem and have even led to suicide attempts. Will you call on Health Ministers around the world to ban "gay cures"? We have no time to lose: The next session starts this Sunday. 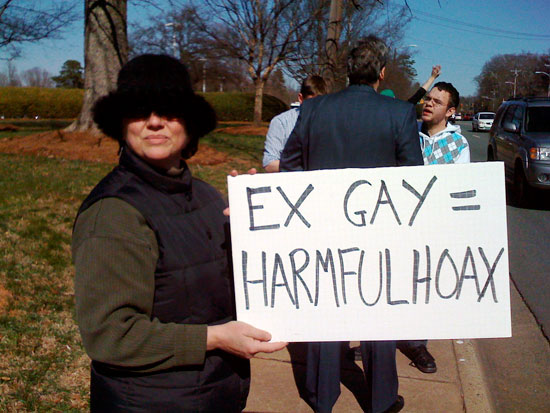 For more than 30 years a powerful group of religious extremists claimed they were able to cure homosexuality. Charging up to $1,200 for each "treatment" session, these groups make millions selling the idea that gay people are diseased just because of who they love. Every reputable source -and even the founders of "gay cure" treatment- now reject the approach citing its nearly 100% failure rate and dramatic damage to self-esteem for gays and lesbians.
Last week, the leading organization behind these horrible practices publicly acknowledged that they were a fraud -and called an end to the damaging "treatment". But one major splinter group, "Desert Stream", refuses to bring this lucrative business to end. "Desert Stream" is currently selling "gay cures" in more than 30 countries. If we can stop them, we can eliminate the scourge of these backwards "treatments" across the globe.
The next "gay cure" sessions are planned in 10 countries starting this Sunday, from France to Australia, Lithuania to the UK - and all over the USA. We are going straight to governments to demand immediate action and an official ban on "gay cures". With their extremist movement cracking apart, we can deliver the final blow that will stop them for good. Will you call on governments around the world to ban "gay cures" now - and prevent Desert Stream from doing more harm?
The major group leading the extremist anti-gay crusade is Exodus International - Desert Stream recently split from them over the issue of "gay cures". While Exodus has recently renounced "ex-gay treatments," they haven’t stopped punishing people for being who they are or funneling money into building their cause around the world. Exodus, Desert Stream and their followers sell the idea that people who feel same-sex attraction should stifle it - they should smother it so deeply that they don’t recognize or love themselves. What’s worse, they claim they have scientific evidence to support this theory and charge people top dollar to push their damaging misinformation.
The World Health Organization, along with psychiatrist associations around the world, has already denounced these "treatments" as ridiculous at best and suicidal at worst. But sessions are beginning in France and Argentina next week, with 10 more countries to follow.
This is a moment of great weakness for the "ex-gay" movement - even the "father" of these so-called cures has publicly renounced his own research. If we stop Desert Stream and make it illegal for them to do more harm, we can put an end to "gay cures" around the world.  We will be delivering these signatures straight to Health Ministers around the world to demand immediate action.
Desert Stream is the last global group to push for these dangerous "cures". We have no time to lose - the next session is in France this Sunday. Will you sign now? www.allout.org/endgaycures
Sources:
Rift Forms in Movement as Belief in Gay ‘Cure’ Is Renounced - New York Times
www.nytimes.com/2012/07/07/us/a-leaders-renunciation-of-ex-gay-tenets-causes-a-schism.html?pagewanted=all

World Health Organisation / PAHO: " ’Cures’ for an illness that does not exist"
new.paho.org/hq/index.php?option=com_docman&task=doc_view&gid=17703&Itemid

Dutch minister stops gay ’cure’ therapy health insurance
www.pinknews.co.uk/2012/06/05/dutch-minister-stops-gay-cure-therapy-health-insurance/
Contact:
All Out is bringing people together in every corner of the planet and of every identity - lesbian, gay, straight, bisexual, transgender and all that’s between and beyond - to build a world in which everyone can live freely and be embraced for who they are.
Mailing address:
Purpose Foundation
224 Centre Street
New York, NY 10013