For the first time since the last European elections, all five mainstream political groups co-authored the text to condemn homophobic laws in Europe. 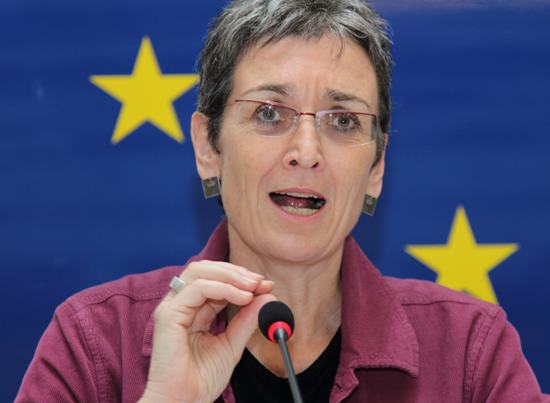 For the first time since the last European elections, all five mainstream political groups co-authored the text to condemn homophobic laws in Europe.

With a large majority (430 for, 105 against), the European Parliament has adopted a resolution to condemn homophobic laws and discrimination in Europe. For the first time since the last European elections, all five mainstream political groups co-authored the text, including centre-right EPP, S&D, ALDE, Greens/EFA and GUE/NGL.
In today’s resolution, the European Parliament “strongly condemns any discrimination on the basis of sexual orientation and gender identity”.
The Parliament adopted its official position after a debate on Tuesday, where MEPs almost unanimously asked the European Commission and European governments to better protect the rights of lesbian, gay, bisexual and transgender people.
The resolution particularly condemns recent laws or proposals in EU countries (Lithuania, Latvia, Hungary) and Council of Europe Member States Russia, Ukraine and Moldova, making it a penal or criminal offence to talk positively about homosexuality in public.
These laws and proposals consider “gay propaganda” any support, tolerance or acceptance of LGBT people. They have already been used to arrest and fine citizens, and legitimise homophobia and sometimes violence, as was the case in Kiev and Saint Petersburg.
Ulrike Lunacek MEP, Co-President of the LGBT Intergroup in the European Parliament, commented: ”Such a huge support from across political groups shows that homophobes are losing their ground in Europe.
“Politicians in Lithuania, Latvia, Hungary, Russia, Ukraine and Moldova should take note: all political families in Europe find it unacceptable to limit freedom of expression as they do. We will not rest until these laws are repealed, and LGBT people in these countries can live without fear.”
Michael Cashman MEP, who is also Co-President of the Intergroup, added: “Homophobia, lesbophobia and transphobia are still a cruel reality for too many in Europe.
“We must take action now: the anti-discrimination Directive, the Framework Decision on hate crimes, the recognition of civil status documents and their effects… these are tangible measures we can take within the next two years. We hope Viviane Reding and the Council will show all the good will they promised in this debate.”