According to the Kaos GL 2021 Media Monitoring Report, LGBTI+s are represented as “a problem” spoken of in the media, instead of subjects who have lives, wills and rights. 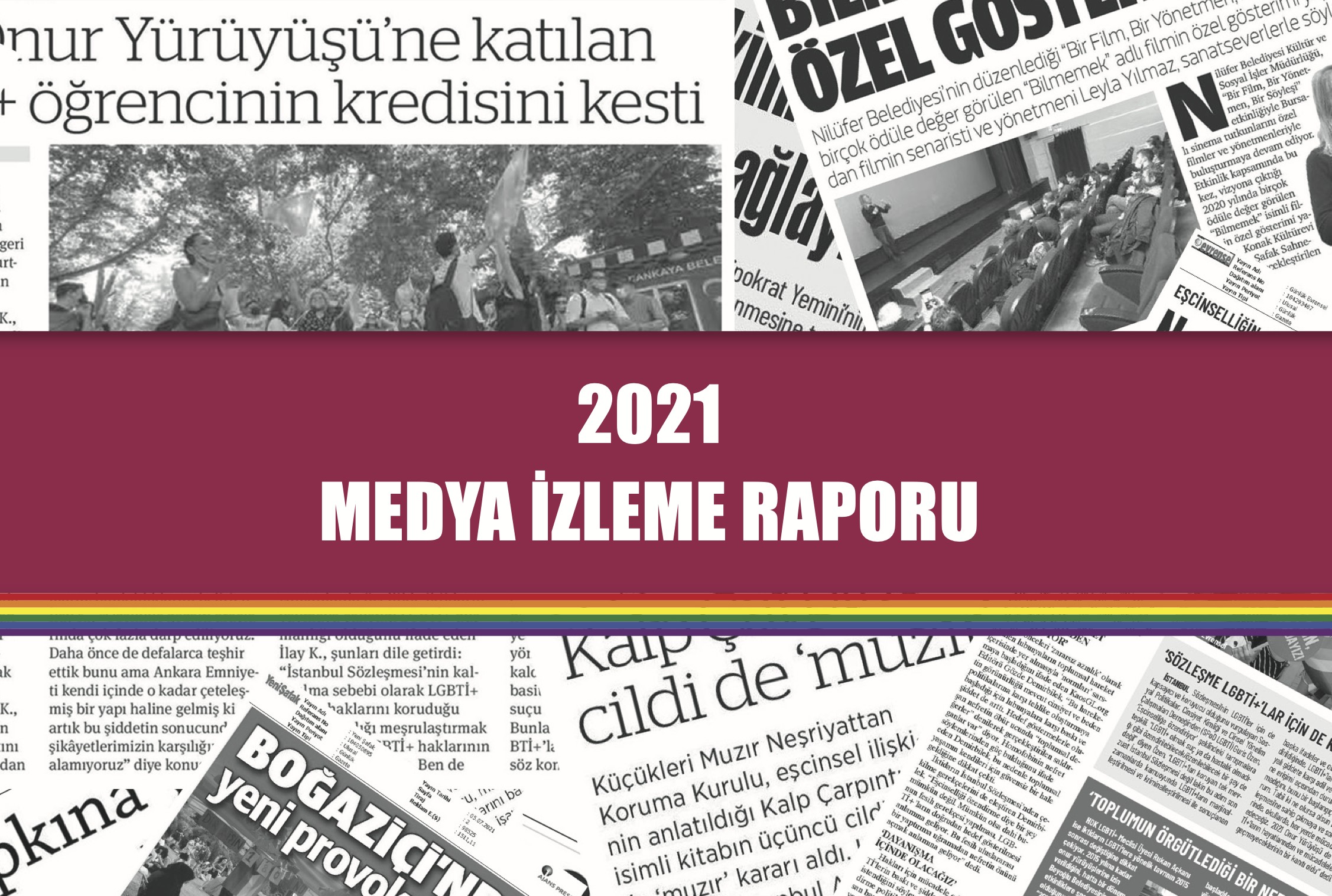 “Revealed knowledge indicates that the news, which were prepared without violating the rights of LGBTI+s with the aim of objectivity, are contended with only not violating the rights. In addition LGBTI+s are able take place at newspapers only if they are exposed to hatred attack or discrimination. While the studies or opinions of the LGBTI+ organizations do not take place in the media; there is also a great lack of reporting success histories as news. This finding, which has been an unchanging data since 2017, indicates that LGBTI+s do not take place in the media as a subject, regardless of positive or negative representation, they are able find a place in the media if and only they are the issue / topic of the news. Media do not represent lives, opinions or struggle of LGBTI+s. Instead, it prefers to speak of LGBTI+s. It is not possible to read voice of LGBTI+s in the media. And it means dehumanization of LGBTI+s in the media. LGBTI+s are represented as, so to say, a “problem” spoken of in the media, instead of subjects who have lives, wills and rights.

CLICK HERE for the 2021 Media Monitoring Report in Turkish

Rate of negative representation: 57 per cent!

According to the results of the research, for which 4011 texts published in the print media were examined, only 43 percent (1707) of the texts regarding LGBTI+s, can be evaluated within the scope of rights-based journalism. As for 2273 texts, which make up more than half (57 percent), fundamental rights of LGBTI+s were violated, hate and / or discriminatory language were preferred or the texts brought up the prejudices related to LGBTI+s.

Discriminatory language, simulating LGBTI+ identities as crime, disease, perversion, immorality or sin, hate speech, hate crime, and violation of freedom of speech and organization become prominent in the violation of rights subcategories. LGBTI+s were represented with a discriminatory language in 2161 news, interviews and columns in 2021. This corresponds 54 percent of all the texts published in 2021. Hate speech was identified in 1249 texts, that is to say 31 percent of all texts. Hate crime was committed by targeting people, associations, institutions or organizations in 1148 texts.

According to the report; when the titles of the texts containing hate speech and / or discriminatory language examined, it is seen that most frequently used word is “İstanbul” (145 times) and “Convention” (99 times) is hard on the heels of it. “Boğaziçi” follows the İstanbul Convention by using it 79 times. This situation is explained in the report as follows:

“This shows us that hate speech against LGBTI+s is frequently created in the news, columns and interviews related to the İstanbul Convention and protests against appointment of trustee-rector to Boğaziçi University, in 2021. We may say that hate speech has taken place in the media through politicians, in favor of politics, in line with our researches in the past years. On the other hand, when we look at the news, interviews and columns which do not contain hate speech, we observed that “Woman and LGBTI” was the most frequently repeated word group. This indicates that while the newspapers which internalize creating hate as a publishing policy target LGBTI+s by their full appellation; the newspapers, which try to respect rights-based journalism and LGBTI+ rights, use LGBTI+s with “and” addition and it doesn’t take place in the center of their publishing policy.

2103 news, interviews and columns regarding LGBTI+s were published in the mainstream media in 2021. The first 10 newspapers carrying out LGBTI+s, regardless of discrimination, hate speech, prejudice or violation of rights against LGBTI+s in the news, columns and interviews published, were as follows:

Almost all the texts published by Yeni Akit, Aydınlık, Milat and Yeni Şafak, which take place in the first 10 newspapers, contain discrimination and hate speech; and Cumhuriyet, BirGün, Evrensel and Gazete Pencere come to the forefront considering rights-based journalism.

CLICK HERE for the 2021 Media Monitoring Report in Turkish