Feminist Principles on the internet were discussed

Feminist Principles on the Net which was translated to Turkish by Kaos GL was discussed during the ‘Cyber Citizens Meeting’. 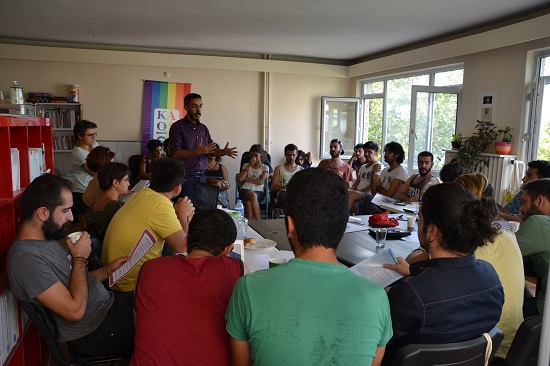 Feminist Principles on the Net which was translated to Turkish by Kaos GL was discussed during the “Cyber Citizens Meeting”.

The first day of the “Cyber Citizens Meeting” held by Kaos GL Association with the purpose of establishing a network regarding internet freedom ended with the discussion of Feminist Principles on the Net. During the activity carried out on 12 September at Civil Society in the Penal System (CİSST) hall, the text which was recently translated to Turkish by Kaos GL was shared with LGBTI activists.

Below mentioned propositions were discussed during the first session of the workshop which consisted of two sessions:

In the second session of the workshop, the participants were split up into groups. Each group discussed articles of Feminist Principles including issues as “freedom of expression”, “economy” and “access”

* “Cyber Citizens are Meeting” is supported by Swedish Development Agency SIDA within the scope of “Internet and Sexual Rights” project of APC which is a partner of Kaos GL as well.

** This activity has been carried out by Pink Life and Kaos GL Associations within the scope of Don’t Hate Project which is financially supported by The European Instrument for Democracy and Human Rights (EIDHR).