From lynching and attacks to the Parliament: LGBTI candidates for nomination

LGBTI activists from the Republican People’s Party (CHP) and the Peoples’ Democratic Party (HDP) spoke to kaosGL.org and explained why they became candidates for nomination for the Turkish general elections. 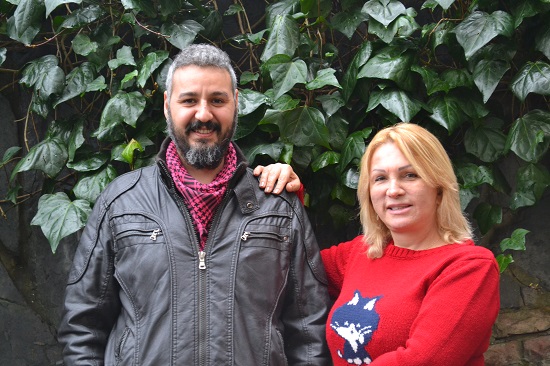 LGBTI activists from the Republican People’s Party (CHP) and the Peoples’ Democratic Party (HDP) spoke to kaosGL.org and explained why they became candidates for nomination for the Turkish general elections.
Baris Sulu and Niler Albayrak
As the June 7 general elections approach, candidates for nominations from various political parties are making their declarations. LGBTI activists from the main opposition CHP and the pro-Kurdish HDP have announced their candidacies.
Niler Albayrak and Baris Sulu, two candidates for nomination, came together at “the Politics School” organized by SPoD (Social Policy, Gender Identity and Sexual Orientation Studies Association). We held the microphone to Albayrak, who is a candidate from the CHP, Istanbul, 3rd District, and Sulu from the HDP, Eskisehir. We asked them what they would like to do if they are elected to the Parliament and why they became candidates for nomination.
From escaping lynching in Avcilar to candidacy for nomination…
Niler Albayrak, one of the trans women who suffered a transphobic lynching attempt in Avcilar Meis Housing Complex decided that she needed to accelerate her political struggle in the wake of the attacks she endured. Albayrak explains her decision as follows:
“There was a craze of urban gentrification in Avcilar and we suffered attacks and lynching attempts that was related to this process. The attack at Avcilar has continued with the homophobic and transphobic thinking by court judges. In the wake of these attacks in Avcilar, I decided to not quit the political competition and take it forward. We need to take this competition forward. In Poland, there can be a trans woman candidate for Presidency. We still often remain as candidates for nomination, [unable to go beyond].”
Having been a candidate for municipal council for the HDP in the local elections and having lost the election because of the HDP falling short of the electoral threshold, Albayrak explains her decision to continue with CHP:
“I believe that LGBTI individuals or especially trans women who are particularly visible must be in the parliament in order to represent themselves better and to defend their rights. This time I am proceeding with the CHP. I thought I would have a better chance to win. Surely, every party has homophobic and transphobic thinking in its ranks. Our society has not been able to accept certain things but I wanted to continue the race to transform both political parties and society.”
Albayrak contends that LGBTI rights can be won in the parliament and states that she expects support from the LGBTI communities and associations.
Albayrak also criticizes the situation of forced sex work for trans women and adds, “They all see us as sex workers, but have you offered any other job opportunity to us that we declined?”
“We must articulate the accumulated wisdom of the LGBTI movement in our own words”
Baris Sulu, who is the candidate for nomination from the HDP, explains that they became a candidate because they believes “the accumulated wisdom of the LGBTI movement must be voiced in our own words.” They adds: “I support the self-representation of subjects. Therefore I looked and saw that there was not much out there, and I acted fast. I thought there had to be someone. I have self-confidence, so I considered all the risks, spoke with my family, consulted many people and became a candidate for nomination.”
Sulu reminds that there were LGBTI candidates in the Peoples’ Democracy Congress (HDK) at the founding of the party and explains their candidacy for nomination from the HDP:
“In the HDK (Peoples’ Democratic Congress) and HDP (Peoples’ Democratic Party), subjects represent themselves. Nobody from outside moved in there and everybody is there of their own will. There, LGBTI people are doing politics in an active and participatory way. From [HDP Co-President] Demirtas to other party leaders, everybody voices very good things about LGBTI issues. Their placards openly say no to homophobia and transphobia.”
Sulu emphasizes that Eskisehir is ready for a gay MP and describes the city where they lives in the following way: “Young, active and dynamic city. An exciting city where one can do politics. I am an excited person and believe that we need to say new things. I am trying to do new things.”
Translation: LGBTI News Turkey