From the Congress of TİP: “We owe it to LGBTI+s who bear the brunt of discrimination”

Speaking in the Intervention Congress of Workers’ Party of Turkey (TİP) Erkan Baş said: “We are here to destroy the system of exploitation. We owe it to LGBTI+s who bear the brunt of discrimination.” 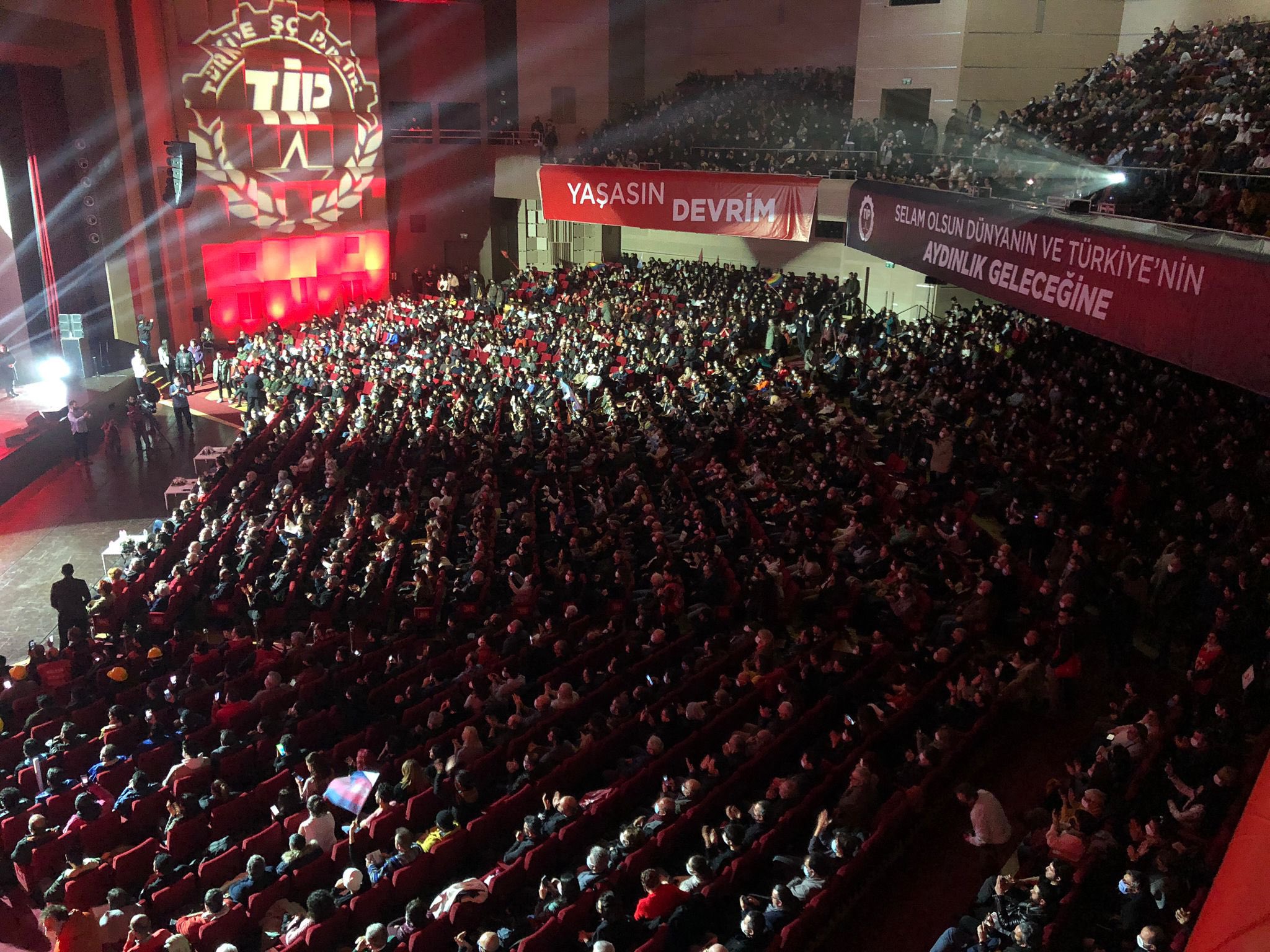 Following the Workers’ Party of Turkey (TİP) Intervention Congress Preparation Conference, Public Gathering was held in Haliç Congress Center today (February 13). Some of the participants had to follow the gathering from the foyer area since the hall, which is for three thousand people, was filled to the brim.

Banners written on “Long live the revolution”, “Long live Socialism” were hung in the hall where the gathering was conducted with the slogans “Haydi başlıyoruz (Let’s start), #YeriniAl” (Take your place). The participants appeared in the hall with TİP flags along the event. Rainbow and trans flags were the only flags beside the colors of TİP.

LGBTI+ associations were among the guests

Workers on strike also attended to the gathering with their uniform and helmet beside party members all around Turkey. Representatives of political parties, unions and associations, which participated in the gathering with the invitation of TİP, were present in the protocol section. Kaos GL, Pink Life and Social Policies, Gender Identity, and Sexual Orientation Studies Association (SPoD) were among the associations at the protocol.

TİP Spokesperson Sera Kadıgil made the opening speech in the event which was presented by Sevinç Erbulak and Alican Yücesoy. Kadıgil emphasized that they are struggling against inequality of income and poverty for socialism referring to Behice Boran and Mehmet Ali Aybar in her speech.

Support and solidarity messages were also read in the event. Solidarity message from Selahattin Demirtaş, imprisoned former co-chair of Peoples’ Democratic Party (HDP), was greeted with great enthusiasm in the hall. Thousands of people responded the message by slogans like “Long live the fraternity of all peoples”, acclamations and whistling.

Resister workers saluted the hall by taking to the stage. Nejla Dolaşık, a Farplas resister and TİP District Head of Gebze, said: “We aspire to manage against bloodsucker bourgeois and political representatives of it!” in the speech she made in the name of resister workers.

Erkan Baş: Power march of laborers is on

Following Dolaşık’s speech, TİP Chair Erkan Baş, shook hands with workers one by one, by getting on the stage. Reminding being organized in 81 towns, Baş said: “Establishment process of our party is completed. We have no more endurance left. We are here to destroy the system of exploitation!” in his speech. Baş emphasized the struggle for establishing socialism by saying: “We owe it to poor Kurdish people and LGBTI+s who bear the brunt of discrimination.” He continued: “We are not going to make leftism in-between leftists. We are going to make ourselves understood by people and we are going to pay attention to public problems. Palace regime will be destroyed and extended family era will end! Power march of laborers is on.”

Following Baş’s speech the event was completed with Bajar concert.

Political Report of Intervention Congress prepared by TİP, was also shared with the participants priorly to public gathering. LGBTI+ rights take part in the “Discrimination and Equal Citizenship” section of the report as follows:

“Neoliberal policies emerged across the world and impoverishment and unemployment as a result of it, affects LGBTI+s directly. On one hand LGBTI+s are not able to access fundamental rights like work, nourishment, sheltering, health and education, on the other hand they are exposed to multiple discrimination as a result of authoritarianism and conservatisation. The oppressive and authoritarian politics and its representative AKP / Palace Regime bears discrimination and hatred by criminalizing LGBTI+s. The ruling party, who refuses gender equality even as a concept, also based its unlawful decision related to withdrawing from İstanbul Convention fundamentally on this justification. Some public institutions like Turkish Employment Agency and public hospitals may not serve people whose sexual orientation is ‘inadmissible’. Symbols representing LGBTI+s are considered as ‘criminal tools’. Pride marches are banned arbitrarily. Our citizens are exposed to oppression and may be killed due to their sexual orientation in various aspects of social life. Failure to properly record and prosecute hate crimes and also the impunity encourages perpetrators. And it dispossess LGBTI+s of the right to life safe and humanly.”