Gays and transsexuals in Turkey target in honor killings’

A recent case in which a 24-year-old transsexual was killed by her brother brings attention to whether Turkey’s infamous honor crimes also target transsexuals. 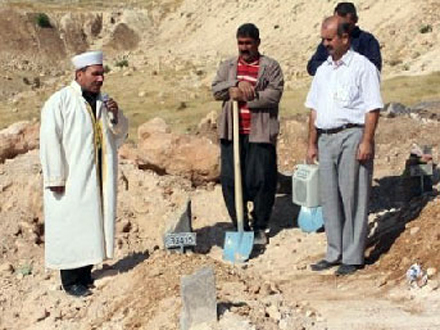 A recent case in which a 24-year-old transsexual was killed by her brother brings attention to whether Turkey’s infamous honor crimes also target transsexuals. Such cirmes are not uncommon, a lawyer says
Members of a LGBT rights organization carry placards during a demonstration in Istanbul to protest the inadequate laws that fail to protect transsexuals from hate crimes.
Honor killings against women regularly draw unwanted headlines in the Turkish media, but the recent murder of a 24-year-old transsexual, who was killed by her older brother due to her sexual identity, has drawn attention to another angle of honor killings in Turkey.
The murder occurred in the southeastern province of Gaziantep in a hospital where victim Ramazan Çetin was being treated for a problem in her leg. Her 27-year-old brother, Fevzi Çetin, visiting Ramazan in the hospital, allegedly killed her due to societal pressure against his sibling’s appearance. “I have cleaned my honor,” Çetin said in his testimony to police.
The transsexual community of Turkey; the Lesbian, Gay, Bisexual and Transgender organizations, as well as some lawyers have condemned the murder, saying that it was both an honor killing and a hate crime.
“On top of recognizing our sexual identity, which is very difficult, most of us live under such fear every day. That’s why many of us leave the city we used to live in or go underground. Some could not even reveal who they were for pure family pressure,” one transsexual who went by the pseudonym Pınar told Hürriyet Daily News.
Pınar said she has not seen her family for five years after she revealed to them that she was transsexual.
“I came out when I was 18. My family lives in a small town and they are quite conservative; my father is involved with some religious sects. When I told them I was transsexual, of course they didn’t speak to me; they chose to ignore it. I was however lucky. I left home and they never bothered me. I have many friends who are threatened, especially by their brothers or fathers,” she said.
Fatih Söyle, a lawyer who specializes in hate crimes, said such crimes toward different sexual identities was not uncommon, but added that Turkish law did not mete out severe punishment for such cases.
“I was right at the court the other day and I saw that two murderers who caused a homosexual and a transsexual to die were sentenced to 13 and 25 years respectively,” Söyle said. “They were first sentenced to life in prison, but the court lowered it for their good manners in court.”
Ali Erol from KAOS GL in Turkey, an LGBT rights organization, agreed.
“This is a hate crime supported by the laws. Unfortunately even the laws support that people with different sexual identities are not tolerated,” Erol said. “The murderers of Ahmet Yıldız are still being sought.”
Ahmet Yıldız was killed in 2008 at the age of 26, allegedly by his father for being homosexual. His case is still unresolved due to the fact that his father is missing.
Gaziantep Women’s Center (KAMER) representative Aynur Yıldırım said there was no LGBT association in the province, a factor that makes life for homosexual or transsexual people much more difficult.
“Sometimes homosexuals or transsexuals who are in difficulties come to us, but there is not much we can do,” she told the Daily News.
Still, others say that the issue should not just be seen as specific to eastern Turkey.
“In almost every city, transsexuals are under the same conditions,” Erol said. “Making honor crimes specific to eastern provinces means that we ignore the real problem. More than 20 people were killed … last year due to their sexual identity.” (Hürriyet Daily News/IŞIL EĞRİKAVUK)