Government waged war against LGBTI+s: 10 bans and at least 530 detainees in 37 days

The detentions experienced during the march, was among “firsts” for this year. Totally 373 LGBTI+s and LGBTI+ right defenders were taken into custody on the day of march! This number is a record both in the history of Pride Marches and the other public demonstrations. 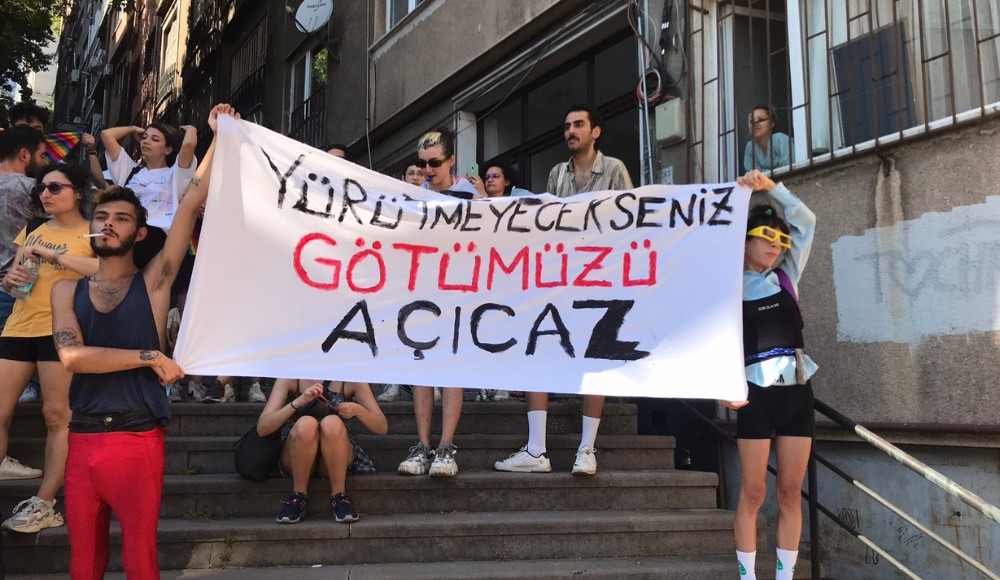 20. İstanbul LGBTI+ Pride March | Photograph: Twitter, Kuir Mavzer, "If you don't let us walk, we will open our asses"

Pride Month in Turkey goes on under pressure than ever before, this year. LGBTI+s try to celebrate Pride Month in the shadow of ban decisions of the government bodies on one hand, and the threats of reactionary and nationalist gangs on the other hand. Pride Month hasn’t finished yet, however experiences from Boğaziçi Pride March on May 26, to İstanbul and İzmir Pride Marches on June 26, are enough to sum up the war waged against LGBTI+s by the state. We collected all experiences along Pride Month till now…

The detentions began with 70 people at 9th Boğaziçi Pride March on May 20, increasingly went on till June 26. 373 people were taken into custody in İstanbul on June 26. This number is among the highest detentions within the context of the public demonstrations in İstanbul recent years. Totally 530 LGBTI+s and LGBTI+ right defenders were detained in 37 days.

9. Boğaziçi Pride March was held on May 20. The stıudents were sent an e-mail announcing the ban on March, from Rectorate minutes before the march, which was planned to be held at 17.00 pm. Following the raw dial of the police, 70 people were taken into custody by torture. Beha and Mert told their experiences at the march to Kaos GL.

Police intervened against LGBTI+s, who gathered in Yeldeğirmeni for celebrating Pride Month. Having been taken into custody by torture, 11 LGBTI+ right defenders were released after their testimonies were taken.

10th METU Pride March, which was held on June 10, was also banned by the rectorate. The marchers were taken into custody by the violent intervention of the police. Totally 38 people were detained within the scope of METU Pride March. Violent police intervention also went on against LGBTI+ activists, who were in front of the hospital in order to take their detained friends.

Rectorate also banned the event titled “Climate Crisis, Gender and Sexual Health” which was planned to be held in the university.

Çanakkale Pride Week, which was planned to be held for the first time this year, was pointed as a target by reactionary and racist groups in the city. Having commenced on social media, hate campaign went on an interview between anti-LGBTI+ religious groups and the Governorship.

Picnics of İstanbul and Marmara Universities

“Pride Picnic”, which was planned to be organized by İstanbul University Equality Society on June 17, was threatened by a group leading reactionists. A reactionary group consisting of at least 300 people, gathered in front of the university on the day of the picnic and wanted to lynch LGBTI+s. The police, who didn’t intervene against the attacker group, took 26 LGBTI+ right defenders into custody while they were waiting in the campus.

Datça Pride Week was also one of the pride weeks, which was planned to be held for the first time this year. The first event of the Datça Pride Week, which was started on June 20, was attacked by the police. Film screening, which was organized by Birlikte Yaşam Evi (Co-existing House) for World Refugee Day, was prevented by the police. Following the unlawful ban, Datça District Governorship announced that they banned all LGBTI+ activities for 30 days, beginning from June 20.

1st Gaziantep Pride Week, which was planned to held between June 23-26, was also cancelled due to threats. The Committee underlined that sexual orientation and gender identity of two people were disclosed without their consent and heard by their families and remarked that they faced serious security problems as a result of the process, and said: “Gaziantep Bar Association and Gaziantep – Kilis Medical Chamber were also pointed as a target on social media. The colorful wall of TC Ministry of Culture and Tourism Şehitkamil Bilgi Yılı Public Library was also targeted.”

Eskişehir Pride Week events, which were planned to held between June 29 and July 3 around the theme of “TRANS”, were also banned by the decision of Eskişehir Governorship published on their website on June 23, for 15 days. Eskişehir Pride Week Committee announced that the events would be held despite the ban decision.

10th İzmir Pride Week began on June 20, without any ban decision. The events, which went on without prohibition till June 24, were banned on June 24 by a decision of İzmir Governorship. The Governorship banned all public events in the city by not mentioning LGBTI+ or Pride Week within the context of the ban decision.

Despite the ban decision, LGBTI+s came together for İzmir Pride March on June 26 Friday. Police attacked the march and 12 people were taken into custody. One of the detainees was released after health control and 11 of them were released after their testimonies were recorded.

As for the 20th İstanbul LGBTI+ Pride March, which was planned to be held as a closure event, was exposed to threats of reactionary and racist groups however they renounced their threats a day before the march. Just before the march, which was planned to be held at 17.00 pm on June 26, the metro stations going out Taksim were closed as of 11.00 am and many streets of Taksim were blockaded by the police.

The detentions experienced during the march, was also among the “firsts” of this year. Totally 373 LGBTI+s and LGBTI+ right defenders were taken into custody on the day of march! This number is a record both in the history of Pride Marches and the other public demonstrations.