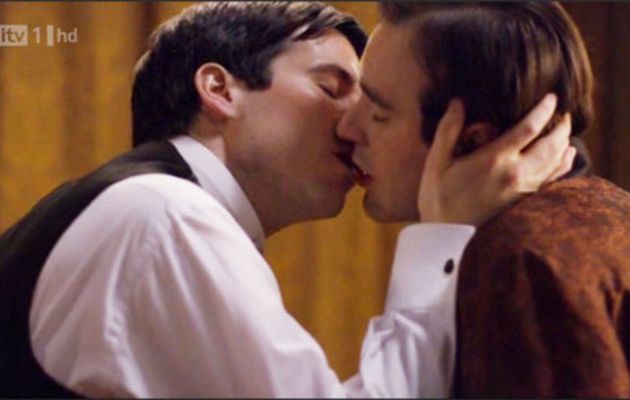 Greeks took to social networking sites such as Twitter to complain about the NET Channel’s decision to axe a scene from episode one of the first series showing a kiss between a visiting duke and Downton’s unscrupulous footman Thomas. NET defended its move, citing parental guidance viewing rules. "As incredible as it may seem for a democratic country in the 21st century, officials of the NET television channel censored the scene of a kiss between men from the TV drama Downton Abbey," the SYRIZA party said in a statement. "This is of course an obvious case of censorship, an extreme act of homophobia and discrimination which unfortunately, after what has been happening recently, we cannot characterize as unprecedented."

One SYRIZA lawmaker, Dimitris Papadimoulis, questioned whether the omission was due to pressure from the far-right Golden (GD) Dawn party or religious authorities with a tweet asking: "NET ’cut’ a gay kiss on the premiere of a top TV series. Who decided this censorship? (Bishop) Seraphim of Piraeus and GD?" Greek state television said the kiss was not censored but rather edited out to comply with rules on the time slot and parental consent label given to the show, which was aired at 10:05 p.m. An unedited version will be broadcast later on Tuesday night, it said. "The love affair between the two men... was not censored," said Costas Spyropoulos, managing director of the Hellenic Broadcasting Corporation. "The kiss was not shown because of the time the programme was broadcast and the corresponding parental guidance warnings."

Greece has seen an upsurge in right-wing extremism since a national election in June ushered the ultra-nationalist Golden Dawn party to parliament for the first time in its history. The latest controversy comes days after dozens of demonstrators, including Golden Dawn lawmakers, clashed with police outside an Athens theatre and forced the postponement of an American play that depicts Jesus and his apostles as gay. Television images showed bearded black-robed priests with crosses in their hands tearing up posters promoting the play, while one woman was shown giving a Nazi-style salute.
Source: http://www.independent.co.uk/