Heterosexual Socialization Policies for LGBT Students Must Be Abandoned!

Making a declaration for the start of new academic year, Kaos GL Association mentioned the problems and requests of LGBT students and wanted ‘LGBT students reality’ to be acknowledged. 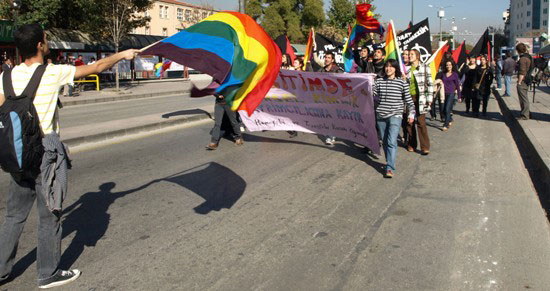 “Compulsory heterosexuality policies aim at the assimilation of LGBT students!”
Compulsory heterosexuality policies presents the heterosexual relationship as the only unique natural relationship and absolutizes it. Course books only describes those relationships. Educators make propaganda of only this type of relationships. LGBT students keep silent and approve of the assimilation attacks to their body and soul.
“We do not want the right to lose our self-confidence and hate ourselves!”
As Kaos GL Association, we say no to education policies which forces LGBT students to deny their personality, pride and soul!
We want equality, not the right to lose our self-confidence and hate ourselves!
LGBT students' right to define themselves, appear as they are and express themselves should be acknowledged and the physical conditions to it should be provided!
“Course books should be free of homophobia!”
Sexual orientation and gender identity should be defined in course books and they should be free of sexist/homophobic/transphobic discriminatory expressions. LGBT students' suggestions and says should be considered regarding how social issues should be covered in courses.
LGBT students should have the right not to attend courses like National Security and Physical Education where women and LGBTs are humiliated and people compete with one another.
“Counselling services should not point at LGBT students!”
Schoold administration and counselling services should not point at LGBT students! It's LGBT students' decision to come out or not to whom, when and how.
New channels should be opened for counsellors to work with LGBT associations!
“Investigations and punishments should be ended!”
Pejorative expressions for LGBTs should not be used in classrooms. LGBT students using their self-defense right against verbal or physcial abuses should not be punished!
Educators who lost their jobs and students expelled from the school due to being or being assumed to be LGBT should be invited back, apologized and their loses should be compensated!
Kaos GL Association
16 September 2011, Friday