Police attacked protesters during the internet censorship protests in Istanbul on Saturday. 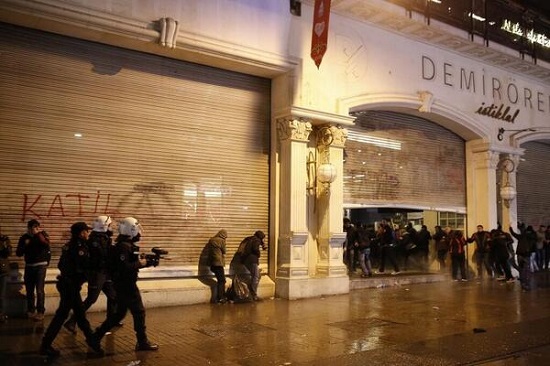 Police attacked protesters during the internet censorship protests in Istanbul on Saturday. Many were taken into custody, including Sezer Yekta, a member of Hevi LGBTI, a Kurdish LGBTI initiative in Istanbul. Yekta was subjected to homophobic insults and harassment throughout the custody ordeal.
Police attacked protesters who were in Taksim at 7:00 PM against the new internet censorship legislation using tear gas, pressurized water, and rubber bullets.
Protests lasted for hours in Istanbul’s Mis Street, the Demirören Shopping Mall, Galatasaray, and Cihangir.
Protesters responded to the attack with fireworks. In addition to attacking a bus with children among its passengers, the police, which heavily deployed tear gas and rubber bullets, caused a great number of injuries, including on press members.
According to the numbers reported to the Bar Association Crisis Center, 49 people were taken into custody. The Bar Association noted that numbers will likely rise.
Homophobic Harassment on Istiklal Street
Hevi LGBTI member Sezer Yekta was among the people taken into custody. Police officers battered Yekta and took him into custody with the charge that he was holding a rainbow flag. Yekta, who was targeted by officers with homophobic insults and harassment, said: 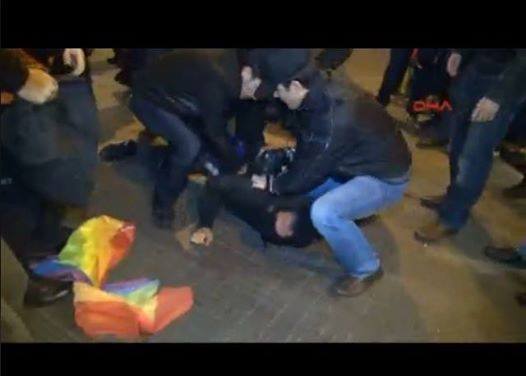 “I was about to unfurl a rainbow flag when the cops attacked. They caught me when I was trying to run away. First, they smashed the flag with their boots. All the while, they were cursing at me, yelling me “the fag whose ass we fuck.” A gang of cops started hitting and kicking me. They stopped upon the reaction of the people around us. Then they dragged me through Mis Street to the Square. All the while, unmarked police officers and the riot police continued with their verbal abuse. They kept cursing at me.”
Translation: LGBTI News Turkey