Hêvî LGBTI Initiative announced its foundation on September 22, 2013 by holding a press conference. 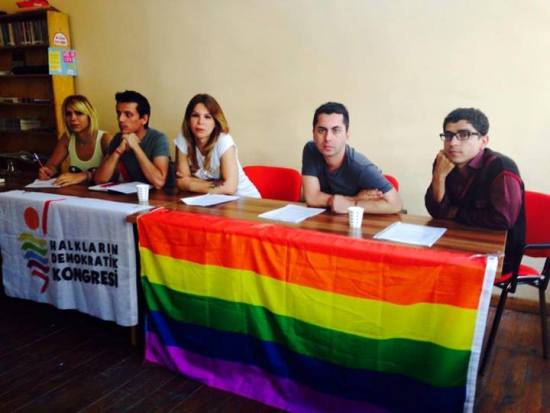 Hêvî LGBTI Initiative: “It was necessary to form an entity in Istanbul that can call out to Kurdistan and so here we are.”
Hêvî LGBTI Initiative announced its foundation on September 22, 2013 by holding a press conference. The initiative’s manifesto was read both in Turkish and Kurdish. Hêvî announced that its main working issue will be “the specific problems of Kurdish LGBTI people living in Turkey.”
“The contribution of LGBTIs to a stable peace is responsibility”
Hêvî Lesbian, Gay, Bisexual, Trans and Intersex (LGBTI) Initiative announced its foundation by holding a press conference at the offices of the Democratic Congress of People (HDK) Beyoğlu District Organization. Hêvî activists Asya Elmas, Rosi Da, Mehmet Umut, Ceylan and Cem Emre Gutay led the meeting. Cem Emre Gutay and Asya Elmas read the initiative’s manifesto in Turkish. The manifesto states that the initiative was formed by a group of Lesbian, Gay, Bisexual, Trans and Intersex people who met at the LGBT Block in Gezi Park during the Gezi Resistance.
The word Hêvî is “hope” in Kurdish and Hêvî aims to create and spread hope among LGBTI people.
“Hêvî supports the idea that LGBTI politics should be evaluated within a broad political perspective. The issues of class, ethnicity, sexism, colonialism, and the rights and freedoms of nature and humans are inseparable parts of LGBTI politics. Hêvî is anti-militarist. Hêvî is against the authority’s systematic pressure and violence; hence it is against the violence and war in Kurdistan. Hêvî believes that the contribution of LGBTIs to the politics of peace is the responsibility in achieving an inclusive and stable peace.”
“Homophobia and Transphobia are extremely high in Kurdistan as well”
Hêvî is an organization that is mostly composed of Kurdish people. The manifesto states, “Hêvî concentrates on the issues and problems that Kurdish LGBTI people living in Turkey face. Hêvî’s main working issue is bringing an end to hate crimes and hate-motivated killings committed against LGBTI people in Kurdistan. It is a well-known fact that homophobia, trans-phobia and bi-phobia are extremely high in Kurdistan as well. Hence hate crimes motivated by irrational hate, fear, intolerance, discrimination and hate-motivated killings are committed against LGBTI people.”
“The Kurdish Issue is of significant importance”
The manifesto states that Hêvî LGBTI Initiative is an anti-hierarchical organization that follows the principles of responsibility and accountability.
“Hêvî LGBTI Initiative aims to set a common foundation and collaboration by developing dialogues with all people and institutions who care about equality and freedom, and especially with LGBTI organizations and groups in Kurdistan and Turkey.” 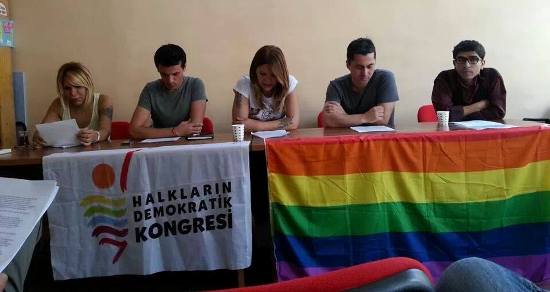 The manifesto states that the Kurdish issue is of significant importance for solving many individual and collective problems and accessing rights within this geographical area.
“Though Hêvî believes that there can be no hierarchy regarding rights and problems, it is important for the LGBTI movement to protect and develop its perspective on freedom by understanding and confronting the Kurdish issue and class contradictions; hence without facing the reality of colonialism, it is impossible to build politics on equality and freedom.”
Hêvî activist Rosi Da also read the manifesto in Kurdish.
Hêvî activist Mehmet Umut added, “It was necessary to form an entity in Istanbul that can call out to Kurdistan and so here we are.”
Translation: LGBTI News Turkey