May 17th, the day homosexuality was removed from the classification ‘illness’, has come to be celebrated since 2004 as the International Day Against Homophobia, Biphobia and Transphobia. 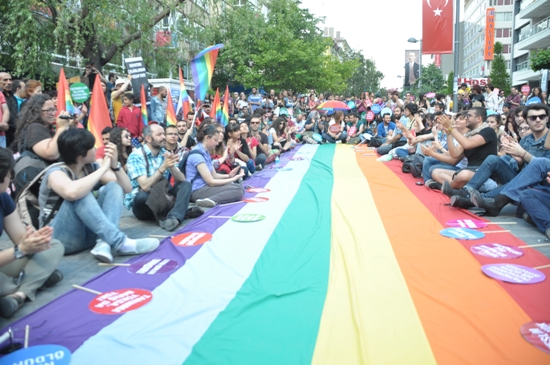 May 17th, the day homosexuality was removed from the classification “illness”, has come to be celebrated since 2004 as the International Day Against Homophobia, Biphobia and Transphobia. Many years have passed since the Declaration of Montreal on Lesbian, Gay, Bisexual, and Transgender Human Rights, which was published following the International Conference on LGBT Human Rights, has called for all nations to recognize this date. Yet, the stigmatization of and discrimination against LGBTIs continue to this day.
Last years’s March agaisnt Homophobia in Ankara
This Sunday, May 17th marks the 12nd year of the International Day Against Homophobia, Biphobia and Transphobia (IDAHOT), which was established in order to fight against homophobia, biphobia and transphobia, to raise the public’s awareness about LGBTIs, to draw attention to rights violations and discrimination, and have their voices be heard. Following the removal of homosexuality from the classification of “illness” by the World Health Organization on May 17th, 1990, and published after the International Conference on LGBT Human Rights, which was organized by the UN, the Declaration of Montreal called for all nations to recognize that date and the wide array of rights and freedoms that ought to be secured. Until now, 130 nations did so formally. Yet, unfortunately, even though many years have passed since then, the stigmatization of and discrimination against gays, lesbians, bisexuals, and trans continue.
In Turkey, as in many other regions of the world, prejudice and discrimination not only cause LGBTIs to be excluded from health programs and limit their access to health services but also deprive them of the most basic human rights. Furthermore, discrimination on the basis of sexual orientation and gender identity also show themselves in the forms of violence and hate murders. While numerous LGBTIs are massacred in hate murders, many others are forced into making their voices heard through suicide. In the meantime, the government, which refuses to recognize the very reality of LGBTIs, fails to take any legal precautions to protect LGBTIs whom it deprives of basic human rights.
Kaos GL Association will organize the 10th Anti-Homophobia Meeting which will take place in Ankara on May 16 and 17, and end with “the March against Homophobia and Transphobia”.
In preparation of May 17th, the day to protest and struggle against all physical, moral, or symbolic violence on the basis of sexual orientation and gender identity, SPoD (Social Policies, Gender Identity and Sexual Orientation Studies Association) has compiled the following 24 problems commonly experienced by LGBTIs.
[1] The Article 10 of Turkey’s Constitution specifies that “everyone” is equal under the law regardless of “language, race, color, sexuality, political affiliations, philosophical beliefs, religion, sect, and other similar decrees.” Furthermore, it specifies that “women and men have equal rights,” that “the state is responsible to guarantee the realization of the aforementioned [gender] equality,” and that “precautions that will be taken for this purpose [gender equality] cannot be interpreted to be against the principle of equality [before the law].” The Article similarly obliges the state to take precautions in order to protect “children, the elderly, the disabled, widows and children of war casualties, and veterans.” Finally, the Article forbids the privileging of “any person, family, community, or class” and obliges “the state and its administrative offices” to act “in accordance with the principle of equality before the law.” –Trans.
[2] We borrowed the term “sexual being” from the 1953 English translation of Simone de Beauvoir’s Introduction to Second Sex, in which de Beauvoir similarly critiques the construction, perception, and consequent othering of women’s difference and subjectivity exclusively as their sex/uality. (source 1, source 2) –Trans.
[3] Turkey has a sexed/gendered national ID system, where all citizens are issued either a blue (for men/males) or a pink (for women/females) mandatory ID card. –Trans.
Translation: LGBTI News Turkey