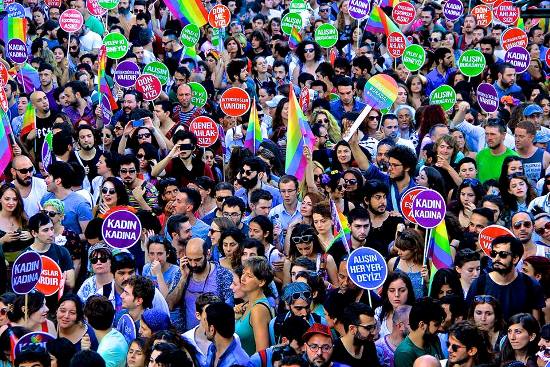 Istanbul LGBTİ+ Pride Week Commission made a press declaration about the Governorship’s ban on Pride March:

“Since 2003, we have been organizing a LGBTI+ Pride March on Istiklal Avenue, the last Sunday of June to raise our voice against rights breaches we encounter throughout the year, to demand equality, freedom and legal status and to state that we are not ashamed but “PROUD” of our existence. It is crucial for us to be visible at the center of cities at least for one day of the year.

“Today (June 17, 2016), the Istanbul Governorship released a press statement declaring a ban against the Pride March scheduled to take place on June 26, 2016. It has been this same institution that tried to ban the March last year, in which 100 thousand people were expected to participate, putting forth the reason that “certain sectors of society would be sensitive due to the fact that it [was] scheduled during Ramadan.” Last year’s ban caused tens of people to be injured. The violence incurred is on record and has received worldwide attention.

“The Istanbul Governorship’s justification this year is the various threats directed at the March. We wish once again to remind everyone that the fundamental duty of the state is not to prevent people from exercising their rights. It is to obliterate the obstacles against people who are exercising their rights. In other words, it seems that the governorship prefers to limit people’s rights and freedoms instead of taking measures to deal with the threats.

“The right to assemble and organize demonstrations is included in the basic human right of freedom of expression and it is observed as such both by the constitution and by international agreements. As the constitution states, “Everyone, regardless of whether or not they seek prior permission, has the right to assemble and organize demonstrations.” Similarly, Law number 2911 regarding Assembly and the Organization of Demonstrations explains clearly in which ways this right may be exercised. Once again, this decision taken by the governorship is against the law. We respectfully declare to the public that as the Pride Week Commission, we will pursue legal channels and follow up on this case.”