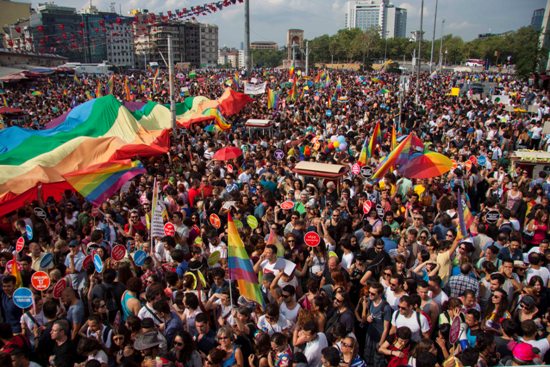 The 22nd Istanbul LGBTI Pride March will take place on Sunday, 29 June 2014. LGBTI Pride Week calls for your support to fund the march and Pride Week events through this indiegogo campaign.
Turkish daily newspaper Hurriyet columnist Ayse Arman spoke with Gorkem Ulumeric from the LGBTI Pride Week committee about this year’s Pride Week:
Who is organizing Istanbul LGBTI Pride Week?
A crowded group of volunteers. It includes LGBTI organizations, members of the media, lawyers, academics, teachers, bankers, university students, artists, and sex workers. It’s an unbelievably colorful and big family. It grows constantly with the support of LGBTIs from all over Turkey, from Izmir to Mardin. Pride Week is the time when LGBTI people’s struggle for rights and demands are put on the agenda.
Who attends the week?
Everyone who thinks “We can transform the world into a better place together, and I can contribute to this!” Our motto has been: “If you are not here with us, we are one too few” for years. We have changed it and we now say: “If you are not here with us, we are so too few.” The efforts of LGBTI people are never enough and this is the case all over the world. If we imagine a shared world that respects all identities, without discrimination based on language, religion, race, sexual orientation or gender identity, we will succeed through everyone’s efforts.
Last year was incredibly festive. How will this year be?
It will be very splendid again! We invite everyone on Sunday 29 June. We believe that the most correct policy is to allow individuals to realize and express themselves freely without pressure. We want to show this to the world again from Istanbul Pride. We are here, get used to it, we are not going anywhere. We cannot be stopped.
What are the problems this year?
The LGBTI movement in Turkey is growing rapidly and is spreading to smaller cities. With Gezi Park, new LGBTI organizations and initiatives started in many Anatolian cities. This year, we want to host guests from all LGBTI initiatives in Turkey in Istanbul and we want to have events across Turkey. We face budgetary problems in terms of transportation and housing. Also, last year attendance at the Pride March was very high. This doubled the costs of printing banners and announcements. Our wish is to be able to send everyone home from the march with rainbow flags. We need a serious budget for this. Furthermore, this year we could not get the funding support that we have received in some years. But nothing can stop us from marching! The Pride March has happened despite financial impossibilities for years, and it will happen. When shouts for freedom rise all across the world, we will also be on the street on Sunday 29 June to say “We are here, get used to it, we are not going anywhere!” But of course, we would be very happy if you can support us. That’s why we started an indiegogo campaign. Anyone who wants to help can donate however much they can to Istanbul LGBTI Pride Week. It is one of the few marches in the world that is not supported by its municipality.
Is expecting support from the municipality naive?
Well, maybe that’s how it should be. Istanbul Pride March is one of the most crowded marches in the world and at the same time it is one of the few marches that does not enjoy municipal support. Other municipalities in the world fund their cities with budgets that are much higher than ours and contribute all their means to use. Many mayors walk with rainbow flags in the march. Every year, many members of parliament join our march. We hope this year our mayors will also join us!
Translation: LGBTI News Turkey