Italian striker Antonio Cassano has been fined 15,000 for the anti-gay comments he made in the run-up to the Euro 2012 championships. 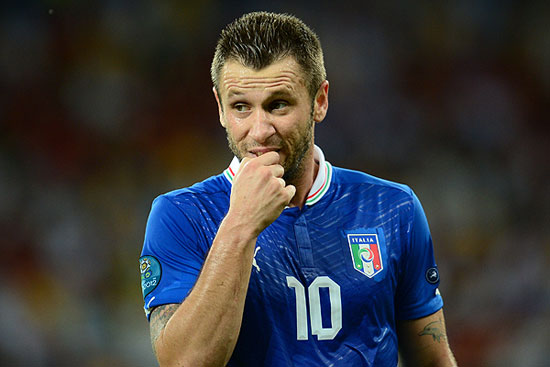 On July 20th, the Union of European Football Associations (UEFA) announced that the Milan’s player Antonio Cassano will be fined €15,000 for an anti-gay comment he made in the run-up to the EURO 2012 held in Poland and Ukraine last month.
When asked about the rumors of two gay players in the Italian squad ahead of the summer’s championship, he responded: “The coach warned me that you would ask me this question. If I say what I think… I hope there are none. But if there are queers here, that’s their business”.
UEFA said today: “Following the opening of disciplinary proceedings against Italy’s Antonio Cassano for a discriminatory press statement (Art. 11bis of the Disciplinary Regulations) during UEFA EURO 2012, the UEFA Control and Disciplinary Body has decided to impose a fine of €15,000 on the player. An appeal can be lodged against this decision within three days of the dispatch of the full written decision.”
Cassano had issued a statement shortly after the original comments saying he did not pass judgement on others. “I sincerely regret that my statements have sparked controversy and protest from gay rights groups… homophobia is a sentiment that is not mine. I did not want to offend anyone and I cannot question the sexual freedom of other people. I only said that it is a problem that does not concern me and it is not for me to pass judgment on the choices of others, who are all respected.”
This is an important step due to the widespread homophobic attitudes still present in sports. There are very few openly queer international football players, but this is mainly attributed to the fact that a different sexual orientation can exert a negative impact on someone’s professional sporting career.