Kaos GL’s respresentative Nevin Öztop joins Irish ministers, parliamentarians, educators, students, local and international LGBT activists in Dublin.
Irish LGBT organization BeLonG To, focusing on the inclusion of youth in various social fields, in particular education, hosted an international event on June 17, 2013. LGBT activists from Ireland as well as Macedonia, Lithuania, USA and Turkey were present at the conference.
Minister Fitzgerald: “We have half democracy”
The event was opened by Frances Fitzgerald, Minister for Children & Youth Affairs in Ireland. Fitzgerald put special emphasis on the factors that perpetuate unemployment among youth. She commented: “Youth unemployment and discriminations stand out as one of the biggest problems in Europe right now. We have an unfinished democracy as far as women and LGBTs are concerned. We have half democracy.”

Fitzgerald then continued: “This is about putting LGBT issue as a headline. It is about voice that needs to be maintained nationally and internationally.”

Phil Prendergast, MEP, Intergroup on LGBT Rights at the European Parliament, commented on the importance of equality in education for youth: “Some vulnerable groups are seriously discriminated by the failure of politics to provide equality for all. If you take a child’s education, you are giving discrimination in return.”
She then continued: “The agenda is to make life easier for people. Getting messages out there is important.”
Geoffrey Shannon, Special Rapporteur on Child Protection, Irish expert at the Commission on European Family Law and the Chairman of Adoption Authority of Ireland, spoke on the importance of providing equality at young ages starting with the formation of families.
“The aim is to disrupt the transition of prejudice from generation to generation.”
Eliza Byard, Executive Director of GLSEN (Gay, Lesbian & Straight Education Network), spoke on the situation of LGBTs in the US. She commented: “Other than the right to fight and die in the US Army, as a lesbian, I have no rights at national level. We have established GLSEN with the aim of disrupting the transition of prejudice from generation to generation.” 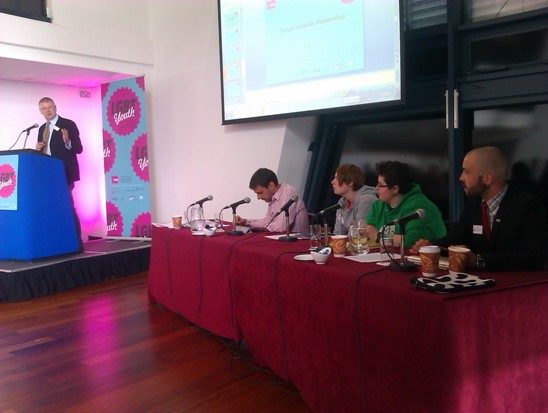 Nevin Öztop, Executive Board member of Kaos GL, spoke on the role of LGBTs in the recent unrest in Turkey. She spoke on the solidarity created among various political and social groups of young people.
Öztop also spoke on the practices of Kaos GL in the field of education. She presented examples from the work done with educators, consultants, students and education unionists.
BeLonG To also hosted a “Community Forum” on June 16, with the participation of local Irish LGBT activists.