Kaos GL Association has started preparing for an academic journal to be published next year. The journal is expected to be named KaosQueer+. 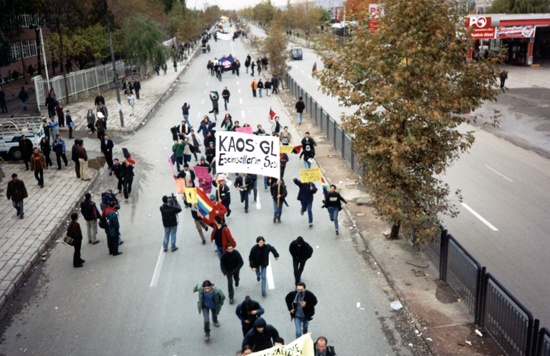 Kaos GL Association has started preparing for an academic journal to be published next year. The journal is expected to be named KaosQueer+.
Following its 4th general assembly, Kaos Gay-Lesbian Cultural Research and Solidarity Association (Kaos GL) discussed the idea of publishing an academic journal during the “Advisory Committee” meeting last December, which was organized under the responsibility of Kaos GL Administrative Board member Professor Doctor Melek Göregenli. Efforts for the “transdisciplinary academic journal” are still ongoing.
According to Melek Göregenli, works for the journal are to be finalized at a meeting in Ankara in October. During that meeting, members of the Advisory Board will evaluate the work done in July and make a call for proposals. The journal is to be published biannually at the beginning, whether it will become seasonally periodical is to be determined in the process.
Transdisciplinary Academic Journal
The team gathered for the preparation of the journal said “we are investigating a new relation between the academic disciplines and their field of study” and added: “What we envision regarding this relation beyond disciplinary immobility and freezing spots is to be called transdisciplinary.”
Starting its journey from a transdisciplinary perspective with peer-reviews, KaosQueer+ is getting prepared to join in the world of thought/action. It will be open for contributions, brain-storming and creative seductions provided that they are conscious of the sexed “knowledge” and they problematize that.
Following a meeting to be held in October, call for proposals for KaosQueer+ will be open.