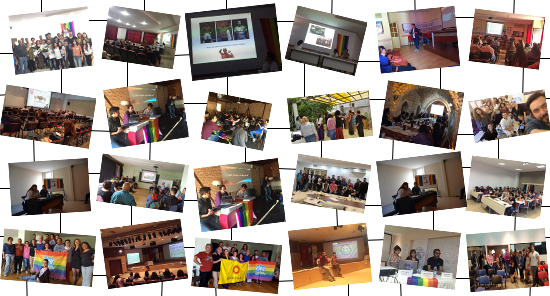 Kaos GL Association went to 13 cities in April within the scope of Meeting Against Homophobia that it has been carrying out since 2006.

Kaos GL Education Group members met students and teachers in Çanakkale within the scope of Rainbow Coalition Against Discrimination Project. In the activity that happened thanks to collaboration of Ece Ayhan Civil Initiative and Çanakkale Municipality an awareness study for teachers took place. Members from Women Platform also watched the activity.

Adana: Homophobia and Transphobia in Sports

The panel themed as “Gender and Sports” happened in Çukurova University School of Physical Education and Sports on Tuesday, 19th of April. Referee Halil Ibrahim Dinçdağ, who was banned from the professon due to the fact that he is gay, Pınar Öztürk from Haceppete University Department of Sports and Seçin Tuncel from Kaos GL participated in.  In the activity that happened thanks to the support of Irem Kavasoğlu, who is an academic in Çukurova University and a member of KASFAD, a lot of academicians and college students took place.

Kaos GL Education Work Group held an activity against homophobia and transphobia in Samsun Eğitim-Sen on Saturday, 16th of April within the scope of Rainbow Coalition Against Discrimination. In the activity, where Berna Savcı from Education Work Group was a speaker, school counselors, social service specialists and psychologists participated. Savcı discussed the key terms about LGBTIs. She talked about sexual orientation and gender identity.

And, within the scope of Rainbow Coalition Against Discrimination Project, Aylime Aslı Demir from Kaos GL took place in the Psychological Guidance and Counseling (PGC) Department class of Kocaeli University Faculty Of Education.

Aka-Der Kadıköy LGBTI Workshop organized a panel to discuss about struggles and discrimination of LGBTI people in social and economic fields. Damla Özerkan from the Workshop and Yıldız Tar from Kaos GL attented as speakers. Yıldız Tar started a discussion about “disease”, “crime”, “sin” and “abnormal” in his presentation, which s/he* began with the explanation of the relation between capitalism and heterosexism. S/He told problems in employment, mobbing and invisible discrimination through “lavender roof” term. Özerken from the Workshop, stating homophobia and transphobia is a system problem, underlined the collective fight.

Media School for Human Rights Monitoring, which Kaos GL planned to conduct as part of Meeting Against Homophobia, got together with prospective reporters in Mersin, following the media schools in Bursa, Denizli, Istanbul, Izmir and Ankara. Nearly thirty people participated to the workshops on 3 April, hosted by Mersin 7 Colors LGBTI Association at Mediterranean Municipality City Council. Yıldız Tar, one of the editors at KaosGL.org and human rights activist Murat Çekiç made presentations in the workshops.

Media School for Human Rights Monitoring got together with prospective reporters in Bodrum, following the media schools in Bursa, Denizli, Istanbul, Izmir, Ankara and Mersin. Nearly twenty women participated to the workshops on 30 April, hosted by Bodrum Women’s Solidarity Association. Yıldız Tar, one of the editors at KaosGL.org, and human rights activist Murat Çekiç made presentations in the workshops.

Karabük: Civil liberties and the state of refugees

Att. Hayriye Kara of Kaos GL Association attended a lecture at Karabük University. Fundamental concepts and the terms binary gender regime, sexual orientation, gender identity, and LGBT were discussed in the lecture with students from departments of Social Work and International Relations. Civil liberties and the usage of social sensitivities as an excuse to hinder civil liberties were also discussed. Immigration, the definition of being a refugee, international immigration policies, Syrian crisis and the legal and social state of LGBTI refugees suffering from layered discrimination were discussed during the second half of the lecture.

Kaos GL Association conducted its first activity in Mardin with social service specialists. The meeting graced by the participation of Februniye Akyol, co-mayor of Mardin, took place on 30 April. Remzi Altunpolat and Ali Erol from Kaos GL, and E. Burcu Yamaner from Kaos GL Social Service Work Group made presentations at the event. The relations of social policies and social services with sexual orientations and gender identities on the basis of lesbian, gay, bisexual, trans and intersex (LGBTI) existences were discussed.

Kaos GL got together with the students of Adıyaman University Department of Social Work and specialists working in Adıyaman as part of Local Meetings Against Homophobia on 29 April. The terms of discrimination, heterosexism, homophobia and transphobia were discussed in the event organized with the contributions of Res. Assist. Mustafa Altıntop. The event was conducted at Adıyaman KESK headquarters with more than thirty participants.

*The activities were done in the scope of Local Meetings Small Grant Fund with the support of Sweden Development Fund (SIDA), Norwegian Embassy, Rainbow Solidarité and Open Society foundation and with the contributions of Sivil Düşün EU Programme.