Kaos GL was in 6 different cities in January

The Anti-Homophobia Meeting 2016 of the Kaos GL Association got off to a good start in 2016. The association organized events in Bandirma, Van, Denizli, Bursa and Istanbul, and was hosted in Nicosia for a panel on the Penal Code of Northern Cyprus. 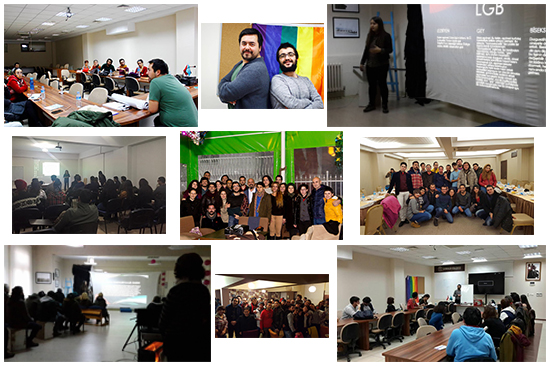 The Anti-Homophobia Meeting 2016 of the Kaos GL Association got off to a good start in 2016. The Kaos GL organized events in Bandirma, Van, Denizli, Bursa and Istanbul, and was hosted in Nicosia for a panel on the Penal Code of Northern Cyprus.

A coastal county by the Sea of Marmara hosted the first Anti-Homophobia Meeting of the year. In the event co-organized by the Our Children Culture, Art and Nature Association and Kaos GL on January 3, Kaos GL’s Gozde Demirbilek explained the basic LGBTI (lesbian, gay, bisexual, trans, intersex) terminology. Following the presentation, participants were encouraged to ask their questions regarding sexual orientation and gender identity, and discussed myths around the issue.

Nazli Gizem Yildirim, Burcu Yamaner and Tarik Simsek of the Working Group talked about “concepts and frequently asked questions about the LGBTI field” and “evaluating social work cases based on knowledge, skills and values.”

The event in Nilufer Municipality’s Campus of Associations was hosted by Bursa Uludag University’s LGBTI group Free Colors and gave the participants an opportunity to write their own news stories.

The second step of the Media School met with the group Denizli LGBTI and Their Families on January 22 in the western city. KaosGL.org editor Yildiz Tar focused on the concepts of crime, sin, disease and abnormality -commonly used against LGBTI people in various contexts.

The association that gives free legal consultancy for LGBTI refugees met them in a solidarity dinner in the satellite city on January 22. The following day Denizli LGBTI and Their Families hosted a session to discuss how to visibilize the discrimination that LGBTI refugees face. Around 30 Iranian refugees participated in the session run by Yildiz Tar and human rights defender Murat Cekic.

The third step of the Media School welcomed around 20 KaosGL.org correspondents and candidate writers on January 31. KaosGL.org editor Yildiz Tar built up a news story together with the participants based on a transphobic hate crime in the event that took place in the Ismail Besikci Foundation.

*All the events took place with the support of the Swedish International Development Cooperation Agency, Royal Norwegian Embassy, Rainbow Solidarité and Open Society Foundation under the scope of Local Meetings Small Grant.