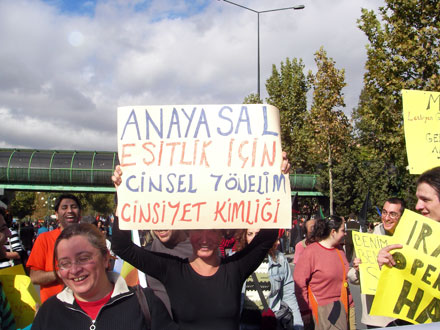 Monitoring bodies have criticised Turkey’s record on LGBT rights. SES Turkey’s Berkhan Karaduman prepared the story on September 5, 2013:
The constitutional drafting commission’s agreed provision on equality for lesbian, gay, bisexual, and transgender (LGBT) people is insufficient to prevent discrimination, according to rights defenders.
The current constitution affirms equality for all citizens regardless of their race, sex, religion or political beliefs. In August, deputies from the Republican People’s Party (CHP) and Peace and Democracy Party (BDP) introduced a proposal to add sexual orientation to the list, but deputies from the Justice and Development Party (AKP) and Nationalist Movement Party (MHP) opposed it.
The BDP, CHP, and AKP subsequently agreed to add language to the constitution’s "rationale" document explicitly outlawing discrimination based on sexual orientation. The rationale is a separate text which explains the logic behind articles of the constitution in order to provide legal guidance to prosecutors and judges.
Ali Erol, co-founder of the Ankara-based Kaos GL association, told SES Türkiye the decision means LGBT individuals are not recognised as equal citizens.
"With the consensus, the constitutional commission has left the interpretation of equality in sexual orientation and gender identity to judges and prosecutors," Erol said. "By failing to recognise the LGBT’s demand for constitutional equality, political actors are signifying that the lives of citizens with different sexual orientations and gender identities are worthless and expendable."
Firat Soyle, an attorney with Lambdaistanbul, said the provision is unlikely to have an impact on the way judges rule on LGBT rights-related cases.
"Judges decide by commenting on the articles of the constitution, not the rationale. That’s why sexual orientation and sexual identity should be added to the constitution’s article on equality," Soyle said.
Monitoring bodies have criticised Turkey’s record on LGBT rights. The European Parliament recently noted an "urgent need" for "for comprehensive anti-discrimination legislation and the establishment of an anti-discrimination and equality board to protect individuals against discrimination based on ethnicity, religion, gender, sexual orientation, sexual identity, age or disability."
According to the Association for the Study of Social Policy Gender Identity and Sexual Orientation, in 2012 LGBT individuals suffered 11 hate murders, eight hate assaults and several other violations, including lynching attempts, torture and ill-treatment, rape, and cyber-attacks.
In a parliamentary speech, AKP Istanbul deputy Turkan Dagoglu said LGBT lifestyles are perverse.
"We do not see as criteria for democracy actions which trigger social degradation and open a door to a way of life that is not approved by our society," she said in a response to a motion to investigate abuses of LGBT rights.
Ahmet Iyima, an AKP member on the constitutional commission, said the public would reject any charter that protects LGBT rights, leaving their inclusion on the rationale document the best option.
Attorney Habibe Yilmaz Kayar welcomed the compromise but warned that it falls short of international human rights norms.
"It’s a very important step that sexual orientation and gender identity will be included in the rationale of the article for the first time, but it’s neither sufficient nor legally binding," she told SES Türkiye.
Kayar added: "In some international agreements, causes discrimination are explained alongside the prohibition of discrimination itself. In the agreements, sexual orientation and gender identity are also marked as very important reasons causes of discrimination."
Sinem Hun, a legal consultant to the Ankara-based Pembe Hayat LGBT Solidarity Association, said protections would be weak as long as Turkey does not adopt these norms.
"The only way [to uphold LGBT rights] is for sexual orientation and gender identity to be written into the article clearly, based on the foundations of Turkish legislation and tradition," she told SES Türkiye.
Hun added: "Judges and prosecutors are quite narrow in interpreting cases pertaining to protecting the rights of minorities. They virtually uphold abuses by saying ’there is no clear regulation in the relevant article.’ That’s why constitutional protection of LGBT people at the highest level, and recognition of their existence in the relevant article is legally essential."
In Turkish: http://turkey.setimes.com/tr/articles/ses/articles/features/departments/national/2013/09/05/feature-01