Rainbow Coalition Against Discrimination made the following statement to demand the apology and the resignation of the Interior Minister, Idris Naim Şahin. 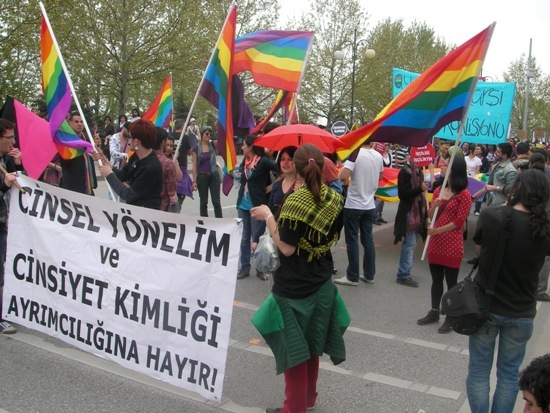 At a speech delivered in Afyonkarahisar on 26 December 2011, Interior Minister İdris Naim Şahin used the following expressions for homosexuals, bisexuals and transgenders who are exposed to all kinds of discrimination, hate crimes, institutional violence, social exclusion and are deprived of their fundamental rights: “…I know what they would do if only they experience that reality for just one day, not even one day for just 1 hour, 10 minutes, because there is no escape, it is not a joke. The statements of those who managed to escape reveal everything. I used to say this, and now the confessors are saying it. That is an environment where there are all sorts of immorality, indecency and inhuman situation from pork meat to Zoroastrianism, from X nation and brotherhood to -forgive me- homosexuality…”
Is the AK Party Government openly promoting an attitude that supports the statements of Selma Aliye Kavaf, the Minister responsible for Family and Women in the previous cabinet, and even goes a step beyond by referring to homosexuality as “immorality”, “indecency” and an “inhuman situation”?
We feel concerned as homosexual, bisexual and transgender individuals of Turkey. The Government has abandoned its thesis of becoming the “government of everyone”, which is declared by the Prime Minister himself after each election, and has targeted the homosexual, bisexual and transgender individuals.
As civil society organisations representing the LGBT population in Turkey, we have been warning the Government for years about particularly the mistreatment, torture, arbitrary detentions and restrictive decisions of the police against transgenders every night. From Minister Şahin’s statements we understand that the Government is intentionally and willingly targeting LGBT individuals which it finds “immoral, indecent and inhuman” and is remaining indifferent to violations against these individuals.
We live in a country where transgenders are lynched, are ill-treated and tortured by the police and where LGBT individuals are killed as a result of hate crimes. It is unacceptable that Interior Minister Şahin is targeting and insulting LGBT citizens for whose safety he is in charge of! The main function of the Interior Minister is to halt and take measures against murders and attacks targeting LGBT individuals and to prevent the arbitrary practices and maltreatment of the security forces which are under his mandate.
We call on the Minister Şahin: We will not remain silent to your statement referring to homosexuality as “immorality, indecency and an inhuman situation” which encourages LGBT murderers at a time when people are being murdered brutally for their homosexual or transgender identity!
We call on the Government: We protest the Ministry of Interior which omitted the phrase “sexual identity” from among the grounds on the basis of which discrimination will be prohibited in the Draft Proposal on Combatting Discrimination and Equality, which will allegedly provide equal protection for all citizens, and the Draft Proposal on Foreigners and International Protection, which introduces provisions on asylum seekers/refugees. We know that a Ministry of Interior chaired by Naim Şahin, who uses hate speech against homosexuals, bisexuals and transgenders can definitively not ensure the security of LGBT citizens. We expressly state that we do not feel safe as LGBT citizens!
Amidst discussions of equal participation in the process of Civil Constitution the statement by the Interior Minister is a barrier before participation of LGBT organisations in the constitution process.
We urge Interior Minister İdris Naim Şahin to urgently apologize from homosexual, bisexual and transgender citizens, and to resign from his post!
We call on the Government the apologize due to the statements of its Interior Minister who insults the counrty’s own citizens, discriminates against them and explicitly uses hate speech!
We invite the Government to avoid any statements that will incite rage and enmity among the society against homosexuals, bisexuals and transgenders!
We embrace our identities as homosexuals, bisexuals and transgenders, which the Interior Minister and Government authorities shunned from even pronouncing by saying; “forgive me but homosexuality.”
Homosexuality, bisexuality and transgender identities are not a sickness, a sin, immorality, indecency or inhuman.
We are homosexuals, bisexuals and transgenders and we are not ashamed of our identities; we are proud of them!
Gökkuşağı (Rainbow) Coalition Against Discrimination