LGBT Organizations in Turkey to Demonstrate for Peace

LGBT organizations in Turkey will demonstrate for peace with rainbow flags on September 1, Sunday. 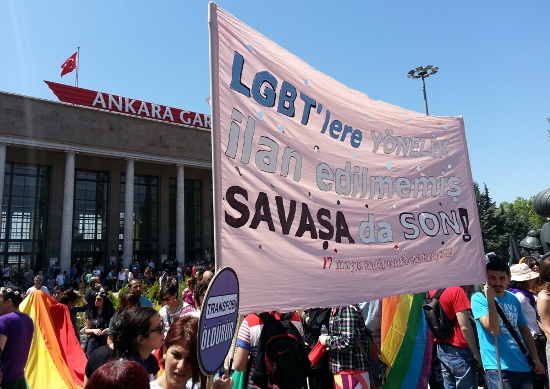 LGBT organizations in Turkey will demonstrate for peace with rainbow flags on September 1, Sunday.
Although UN’s “International Day of Peace” is on September 21, “World Peace Day” is celebrated on September 1 in Turkey.
Kaos GL, which struggles for recognition of the reality of sexual orientation and gender identity, made a call titled “No to War Against the LGBT Society, No to War in the Middle East!” to demonstrate for peace with rainbow flags. Marches for the day will not only be held in İstanbul and Ankara but also in various cities such as Mersin, Antep and Diyarbakır.
Kaos GL defends Kurdish people’s democratic rights and freedom demands such as “rights, justice and equality.” Kaos GL stands against the state policies which consider those demands as an issue of “terror” and “security.”
Kaos GL discussed the “peace” process which started earlier this year as a “negotiation” between the State and Kurdish Political Movement both in the International Feminist Forum and then on IDAHO week during the International Anti-Homophobia Meeting in Ankara.
Kaos GL Magazine opened itself for seeking answers to how feminists and LGBT movement can organize peace and democracy that the Kurdish movement wants for the whole Turkey with other social opposition groups.
Following the discussions of peace in relation to LGBTs, Kaos GL made a call titled “No to the Undeclared War Against the LGBT Society as well”, insisting on the recognition of “sexual orientation and gender identity” on the basis of constitutional equality.
Representatives of the LGBT society in Turkey made an "anti-war" call on IDAHO. After that at the end of June they demanded “bread, justice and freedom” for the Trans Pride and lastly during the Istanbul Pride they declared that they will not give up on “resistance.” 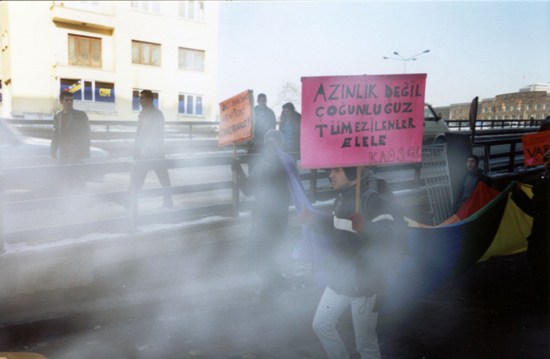 Anti-war struggle is an anti-homophobia struggle!
Kaos GL Magazine kicked off in September 1994, highlighting that our need for peace will not benefit from war and denial.
Kaos GL has always been a constant constituent of anti-war struggle and kept social peace struggle always in its agenda, knowing that heterosexism, militarism, nationalism and sexism are ideologies feeding on each other.
The call “No to War Against the LGBT Society, No to War in the Middle East!” suggests that the LGBT society is a part of the anti-war struggle: “We are of people getting poorer both in the Middle East and all around the world; we are the Arab, American, Kurdish and Turkish youngsters who will be sent to death. We know that war will affect everyone independent of their sexual orientation and gender identity.” 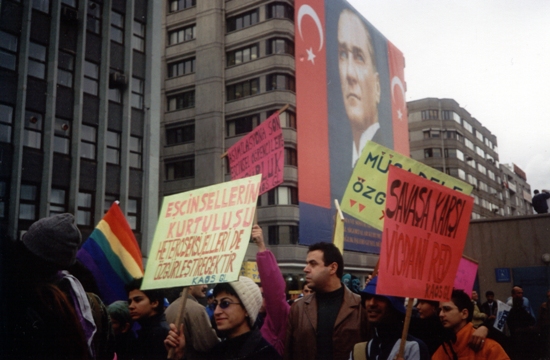