LGBTs Walked for Peace in Istanbul

A group LGBTs marched for peace upto Galatasaray Square in Istanbul. The Independent Members of the Parliament Sırrı Süreyya Önder and Sebahat Tuncel as well as lawyer Eren Keskin have backed the march. 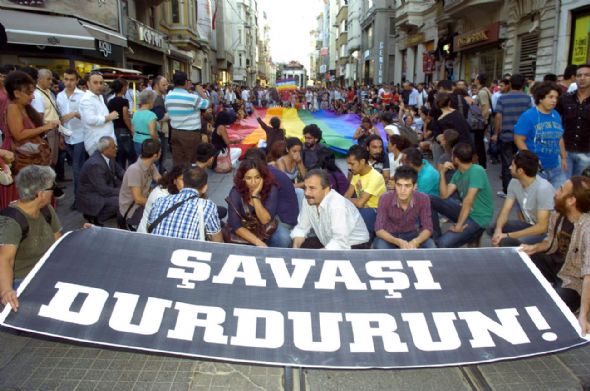 A group LGBTs marched for peace upto Galatasaray Square in Istanbul. The Independent Members of the Parliament Sırrı Süreyya Önder and Sebahat Tuncel as well as lawyer Eren Keskin have backed the march.
LGBTs, nearly a group of 200 people, gathered to make a peace march at 18:00 on Sunday in Taksim Square. Istanbul LGBT Solidarity Association and the Women's Gate were the organizers and Kaos GL, Pembe Hayat, Morel, Eskisehir and Izmir Black Pink Triangle were present at the march as supporters. Istanbul parliamentarians Sırrı Süreyya Önder, Sebahat Tuncel, both of whom are supported by the Labor, Democracy and Freedom Block, and lawyer Eren Keskin were also involved.
Lawyer Eren Keskin who took the floor state “Today is also the anniversary of 12 September Military Coup. Ethnic identities were not denied only during the Coup; this country itself is built upon the denial of ethnic identities. That’s why all “othered” groups need to take actions jointly.”
Under the Rainbow Flag
“Over 30 years, we have been leaving out peace. And at this point we have reached, people who have lived together for thousands of years as brothers and sisters are now at the edge of seeing one another as enemies.” commented Sırrı Süreyya Önder, independent paliamentarian in Istanbul.
Öner, pointing at the rainbow flag behind him, continued “This flag with rainbow colours summarizes everything. Life would be beautiful only if all the colours exist together and that is what we need. During these days, we need to raise the voice of peace more and more. And it means a lot to us as BDP Parliamentarians that you went on the streets to raise that voice.”
After the speeches, the group holding “Stop the War” and a big rainbow flag headed to Galatasaray Square. Participants marched with the slogans of “Long Live, the sisterhood of people!”, “We will not kill, we will not die, we will not be anybody’s soldiers!” and “Resist to hate, long live life”.
“You won’t be able to consume our hopes for peace”
After the marching that ended at Galatasaray Square, Ebru Kırancı read the press release on behalf of the participating LGBT organizations. Kırancı, underlining that they are on the streets for peace, said “It is so sad that, at a time when hopes for peace are refreshing and negotiations are taking place both secretly and openly, war scenerios began to be written once more. 90s’ inhumane methods are again being used. The recently rising torture cases, putting forests to fire and suspicious deaths are very worrisome and grave.
The mentality of those who start war is the same with of those who murder transgenders. Those who kill Kurds and other non-Turks are the same with those who deny gays and lesbians. Those who killed Hrant Dink are also those who condone hate murders against women. In short, the war exists not only at front-lines but in every sphere of life. Under the rainbow flag, we will continue singing peace songs as we get more and more crowded.”
Photos: DHA