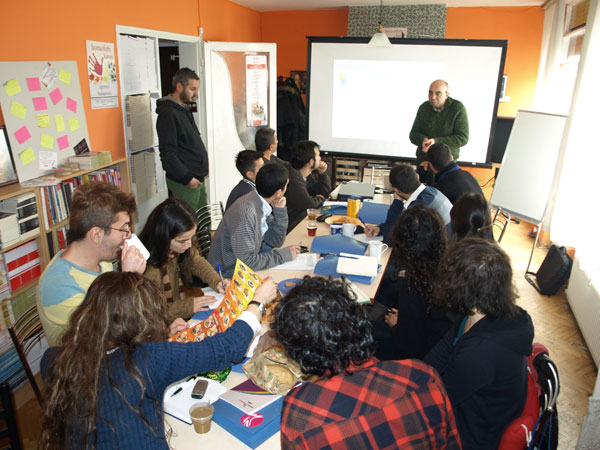 First correspondent trainings of 2012 will be held on 24-25 March in Ankara and on 31 March – 1 April in İstanbul.
“Local Correspondents Network” trainings has started in April, 2007 to strengthen the LGBT rights journalism and enable the local gay, lesbian, bisexual, trans, queer and intersex individuals and organizations to articulate themselves.
Aimed at creating a local correspondent network to change the homophobic, transphobic, heterosexist and sexist language in the media, the trainings will help candidate correspondents research and make news from the city they are living in.
Volunteers who want to be a Kaos GL correspondent and make their own news would be a part of Kaos GL Magazine and kaosgl.org with their news/articles/interviews after the training.
Kaos GL Local Correspondent Trainings are under the scope of the HOPE Project run by Kaos GL Association and Black Pink Triangle İzmir Association. The HOPE Project is funded by the Human Rights Program of Delegation of the European Union to Turkey.
What Does Kaos GL Expect from the Local Correspondents?
An irreversible process had started for LGBTs in Turkey with the start of Kaos GL Magazine in September, 1994.
-With the magazine for the first time ever LGBT individuals from villages to big cities had their say directly.
-The words dissipating in the parks, on the streets and in the darkness of night have been recorded. Woman-to-woman and man-to-man loves that have been looked down upon, stigmatized and convicted to invisibility have been put on paper without being ashamed or keeping in the closet.
-Emerging as a platform for LGBTs to have their say, standing up for themselves and share their problems and ideas, the magazine continues for more than ten years now.
-The magazine – with the articles regarding LGBT movement, theoretical discussions and personal experiences, stories, poems and news – has always been a material produced with its readers.
We are moving a step forward with the Local Correspondent Network to shed light on the problems of LGBTs together with the magazine and kaosgl.org which helped LGBTs create their own agenda.
Participation and Contact:
The candidate correspondents/authors all around Turkey who want to participate in the Local Correspondent Network Training can send their application to editor@kaosgl.org.