‘AKP could not reach its goal with hate campaign’

Barış Sulu, gay candidate in People’s Democratic Party (HDP) has evaluated results of the election: ‘Real face of power came to light that they could not reach their goal with their hate campaign. Politics has just started, keep on struggle.’ 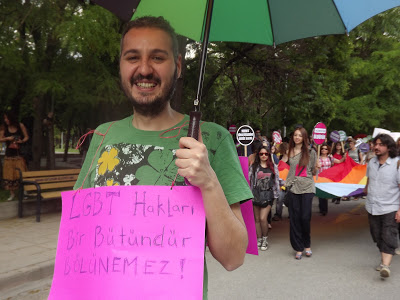 Barış Sulu, gay candidate in People’s Democratic Party (HDP) has evaluated results of the election: “Real face of power came to light that they could not reach their goal with their hate campaign. Politics has just started, keep on struggle.”
LGBT rights are whole, cannot be divided
Eskişehir MP Candidate from the party; passing %10 election threshold signing for a great success, People’s Democratic Party (HDP) and LGBTI activist Barış Sulu has evaluated election results on KaosGL.org.
Sulu, being shown as target by President Recep Tayyip Erdoğan, Prime Minister Ahmet Davutoğlu and many people in Justice and Development Party (AKP) during the election process and about whom homophobic hate discourses have been created in many mainstream media channels has talked about the experiences he had during this process:
“Real Face of power has come to light”
“To be honest, I did not guess that to me and on my candidacy in HDP I did not think they would attack that much to HDP as I was a candidate from Eskişehir on the last array. They must have had so many problems about LGBTI that they created hate discourse against and target on a person who is casual and the last candidate from the party.”
While emphasizing that real face of power has come to light, Sulu reminded that Recep Tayyip Erdoğan said ‘It’s a must for LGBTI people to have legal assurance’ in 2002 on a TV program and added:
“While talking about legal assurance in 2002, nothing has been done from that day until today and moreover, being exposed to homophobic discourses during the election process was shown that his claim is a lie. Real face of power has come to light and again by the press we had been exposed to hate horridly. They made montages and my photos that I and my boyfriend kissed each other had been used on TV.”
“I have been pleased for the women representatives”
Claiming that he has been so glad with the election results, Sulu said that “with these results, it has proven again that defending LGBTI rights does not cause losing votes, LGBTI entities has been accepted no matter what. I did not expect that much of a success. Eighty MPs made me so happy. Number of women representatives as a result of the election made me much happier.”
“AKP could not reach its goal with its hate campaign”
Saying that AKP could not reach its goal with homophobic hate campaign, Sulu talked like “these target attacks made people support HDP. We saw that even some people usually voting for AKP supported HDP by saying that ‘this much of targeting can’t happen’. People that I know voted for HDP due to the AKP’s hate speech against LGBTI.”
“Politics has just started, keep on struggle”
Sulu answered our question that whether he is going to be active in politics:
“From the moment we say we exist, we already participate in politics. Politics is not something once you get into it that you can leave. For sure, I am going to keep defending LGBTI rights in every field, as politics has just started. We have eighty representatives. We will help them work and we will keep following them about the issue of LGBTI rights and in general.”
Translated by Simge Şirin