‘Cultural traditions must not be an excuse for discrimination’

The European Parliament announced the conclusions of the human rights conference held in Tirana on November 21. 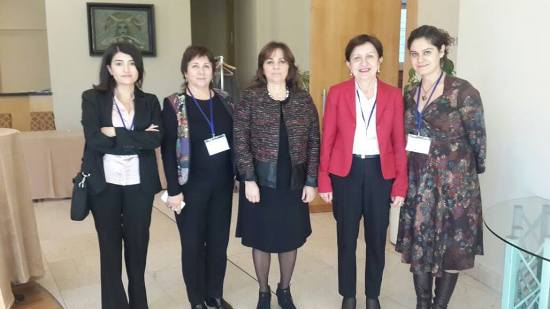 The European Parliament announced the conclusions of the human rights conference held in Tirana on November 21. The EU Parliament emphasized the importance of addressing LGBTI issues in all government policy documents.
Turkish LGBTI activists together with Nursuna Memecan and Binnaz Toprak
Nursuna Memecan from the ruling Justice and Development Part (AKP) and Binnaz Toprak from the main opposition Republican People’s Party (CHP) attended the conference on fundamental rights and non-discrimination held in Tirana by the European Parliament last month. Following the conference, CHP MP Aykan Erdemir sent a written question to PM Davutoglu upon the conservative newspaper Milli Gazete’s claim that the Turkish Directorate of Religious Affairs said “homosexuality is a perversion” in a fatwa.
The European Parliament underlined that respect for fundamental rights, non-discrimination and the protection of vulnerable groups including LGBTI is an important element in the political criteria for membership of the EU.
Following remarks were made in the Conference:
LGBTI people must be included in all policy documents
All minorities and vulnerable groups nonetheless often remain at risk of discrimination, marginalization or even violence in the Western Balkans and Turkey.
Governments need to adopt a comprehensive approach to inclusion of all minorities and vulnerable groups, including LGBTI. It is important to ensure that inclusion is addressed in all government policy documents (mainstreaming).
Priority actions also need to be identified in key policy areas such health, education, public administration reform & police. These must include measurable benchmarks to ensure implementation.
Multiple forms of discrimination must be addressed specifically
Inclusion of measurable benchmarks in all legislative and policy tools is necessary to ensure their robust implementation.
Discrimination on the basis of sexual orientation and gender identity should be prohibited in law and measures taken to ensure that persons belonging to minorities can equally exercise their rights.
A hierarchy of grounds must be avoided and multiple forms of discrimination must be addressed specifically.
Cultural traditions must not be an excuse for discrimination
Efforts are necessary to ensure cases of violence, hate speech and discrimination are brought to attention and that these receive adequate police and judicial follow-up and sanctioning.
Cultural traditions must not be used as an excuse for condoning discrimination.
Parliaments, Human Rights Institutions and Civil Society have a key role to play in the protection of human rights and the promotion of tolerant and respectful democratic societies.
The “My Child” documentary must be encouraged
The distribution of films and documentaries which encourage tolerance and understanding, such as ’Parada’ or ’My Child’, whose director / initiator attended the conference, are encouraged in this context.
The existence of an enabling environment, where non-state actors such as NGOs and the media can operate freely and where freedom of association and assembly is guaranteed, is a key indicator of the democratic credentials of a country.