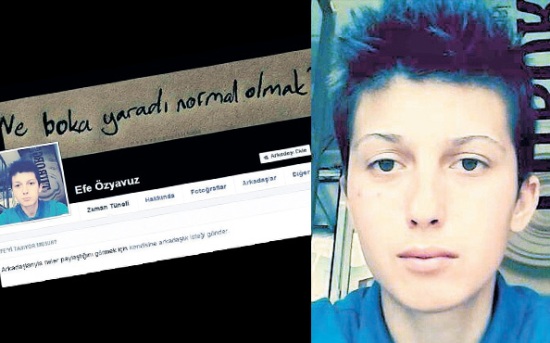 The girlfriend of a trans teen who ended his life in the western city of Izmir yesterday wrote about the family pressure that resulted in the suicide:
My name is Ipek. I was Mukaddes’ girlfriend for the last 8 months. I was his first girlfriend. You could see that he was a trans person. At the time, when we first met, he told me “I want to be a boy,” which didn’t surprise me, since there was already no difference, I found this quite normal.
On that day while looking for a name for him, we came over the name “Okyanus” [the Ocean]. I told him, that this name would suit him. After this day I always called him Okyanus. You cannot even imagine what a good and kind person he was. His dreams were as interesting as the rainbow, he was as eager as the sky. Today I wanted to go to the funeral with a rainbow flag but at midnight my family got a threatening phone call that said “tonight there will be blood spilled”. My mum immediately came to Izmir to pick me up. Just four hours ago, I was testifying in the police station.
Anyway, the day he hanged himself, I met Okyanus in the morning. There was a red bruise on the top left side of his head, on his left hand on the side of the thumb there were 3 cuts. “Are you going to explain these to me?” I said. “I will explain,” he said. “Yesterday, after they picked me up with the car from your place, my dad, my mum, my sibling gave me a hard time, they were really pushing me. Do you know what my dad said to me? ‘Hang yourself, so we can finally get over it,’ he said. They pressured me so much, that I don’t even know how I’m still here,” he started to explain. After “If something happens to me, they won’t be able to look Mira in the eye, right?” (Mira: His only dream was a daughter named Mira who had eyes as beautiful as his own and I’m sure he loved the dream about Mira even more than me.) Later he asked “If I will go, will you come with me?” “I can’t come,” I said. After this we spoke for maximum 10 minutes more. “I will go home,” he said. “Okay,” I said. He didn’t even properly hug me. “Without properly hugging me, you can’t go,” I said. I hugged him, he hugged me the same way as before. I kissed him. He left…
You finally have to realize that the pressure that lies on LGBT-people leads them to commit suicide. When he died, he had two pieces of paper in his pocket on which I wrote the contents of the slides I was going to prepare for him. This morning he said “They took the phone but I won’t give these to them even if they killed me.” What a pain, I cannot even go to the funeral of the person I love.
Translation: LGBTI News Turkey